Aww! Welcome back Jorge Posada! Yankee fans got a treat when Jorge Posada returned to Yankee Stadium to be honored by his team. He got to throw the ceremonial first pitch of the season while his team stood behind him as a sign of respect. His father was on the receiving end of the pitch.

After 17 great years playing for the New York Yankees, Jorge Posada announced his retirement this morning following a press conference at Yankee Stadium. His decision came after fans wondered if Jorge would play for another team when his contract was up. An emotional Jorge told a packed room of reporters, family, friends, and teammates that he could never play for another team.

“I could never wear another uniform,” said Posada. “Being a part of seven World Series and having five rings was something I never imagined, and being a part [of] it was just priceless. I will forever be a Yankee.”

Check out the video of his announcement:

My emotions. I can’t imagine the Yankees without him. Thank you Jorge. You will be missed! 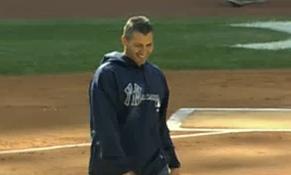 We miss Andy Pettitte so much! Before the Yankees squared off against Detroit for Game 2 of the ALDS, Andy returned to Yankee Stadium to throw the first pitch. He’s lookin’ good! We miss you Andy and the team could really use you this year.

Ouch! The Yankees have been having a rough week. The opposing teams have been using the New York players as Pinatas with 8 players being hit. Six out of eight of the painful blows came from the Boston Red Sox with the other two coming from the Cleveland Indians. This unfortunate string of hits resulted in Joe Girardi and both teams filing out onto the fields for a screaming match and the Indians pitcher being thrown out of the game.

In happier news, Derek Jeter is 7 hits away from a career milestone of 3000 hits. Here’s hoping he succeeds in Yankee Stadium.

If the video won’t play for you, watch it here