If you’re like us, Michael McMillian’s return to True Blood has already been the best part of the new season so far. A gay vampire with an agenda who wants to pay 20 grand for Jason’s rock hard butt? What’s not to love? If you agree, you’re going to love these new spoilers that suggest Steve Newlin won’t be going anywhere anytime soon. There are so many other horrible characters they could kill off instead. Praise his light!

Check out these spoilers for next week’s new episode of True Blood: “Whatever I Am, You Made Me.”

The New Nan Flanagan: Reverend Newlin (Michael McMillian) isn’t just showing up in Bon Temps to make himself an unwanted party crasher, he’ll have a whole new role at the Authority. He’s the best person to take over the old face of the Vampire Authority now that he’s a vampire and a smooth-talking religious nut spokesperson.

No Biting the Merchandise: As you will soon learn Lorena (Mariana Klaveno), Bill, Eric (Alexander Skarsgård) and Pam have a very long, sordid and interesting history. Bill and Lorena were out sowing their wild oats when he and Eric clashed before. This fun flashback also explains why Pam isn’t the biggest Bill Compton fan.

Sex Ed Teacher: If you watch Mad Men you might recognize Jason’s (Ryan Kwanten) former teacher as the first Mrs. Draper (Melinda Page Hamilton). We find out that this is the woman who sent Jason down a sordid sexual path. The gist of this big reveal is that Jason has so much baggage he’d need a whole cargo truck to go on vacation. Did we know that already?

We are loving these spoilers from Eonline.

We’re very excited for more of Pam and Eric flashbacks and of course, the news that Michael McMillian is sticking around. Did the Authority turn him?

Thanks to the ever amazing Tumblr for the flawless gifs. 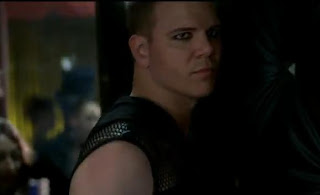 Here I thought Jessica was the one rebelling. Hoyt is wearing guyliner. I’m not sure why but I’m enjoying it. Who will Tara meet first on her first night out as a vampire? Will Bill and Eric be released to find Russell Edgington? Will Sookie come clean to Alcide? Here is the preview promo video for next week’s new episode of True Blood: Whatever I Am, You Made Me.