Well. She really can’t be tamed. In a performance that made Lady Gaga’s seashell g-string look positively g-rated, Miley Cyrus got on stage to perform her hit single “We Can’t Stop.” There were giant teddy bears. There was twerking. Or at least what Miley thinks is twerking. It wasn’t really that bad. Just kind of embarrassing. Put your tongue back in your mouth, girl!

Then Robin Thicke hit the stage and Miley changed into an ill fitting outfit that appeared to be made of latex. It was not sexy or mature which is probably what Miley was going for. Then again, everyone is certainly talking about her today so perhaps she got what she wanted?

My eyeballs, however? What has been seen cannot be unseen.

Check out the full performance video of Miley Cyrus and Robin Thicke at the 2013 MTV Video Music Awards.

END_OF_DOCUMENT_TOKEN_TO_BE_REPLACED

Justin Timberlake was the biggest winner last night at the 2013 MTV Video Music Awards taking home four moonmen. Macklemore and Ryan Lewis were close behind with 3 statues of their own. In what is perhaps going to go down in MTV history as one of the most talked about shows in recent times, last night’s show was all about the performances. I barely remember who won anything at all. If you’re like me and were only able to focus on the NSYNC reunion, here are the full list of winners from last night’s VMAS:

END_OF_DOCUMENT_TOKEN_TO_BE_REPLACED

Everyone may be talking about the looks on their faces when Miley Cyrus took the stage last night but the real highlight of the night came when Justin Timberlake did what he does best. Justin took the stage to accept the Michael Jackson Video Vanguard Award and performed a set of all his hits that spanned a good 15-20 minutes long. But the highlight of the performance came when NSYNC reunited on the stage. Performing a small medley that was reminiscent of their infamous 2000 MTV VMAs performance, the guys got together to sing Bye Bye Bye and a little bit of Girlfriend and Gone.

Watch the video of the NSYNC VMA reunion here:
END_OF_DOCUMENT_TOKEN_TO_BE_REPLACED

Is this the best news ever? Or something to make us actually look forward to the 2013 MTV Video Music Awards? According to the NY Post, *NSYNC is set to reunite for a special performance at this year’s VMAs. Justin Timberlake is set to receive the Michael Jackson Video Vanguard Award at the ceremony.

END_OF_DOCUMENT_TOKEN_TO_BE_REPLACED

Bruno Mars and Macklemore To Perform at 2013 VMAs 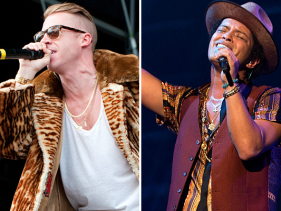 Bruno Mars has just been announced as a performer for the 2013 MTV Video Music Awards. The singer is set to perform his new single off of his hit album “Unorthodox Jukebox.” He’ll be joined by Macklemore & Ryan Lewis who will be performing “Same Love.” END_OF_DOCUMENT_TOKEN_TO_BE_REPLACED