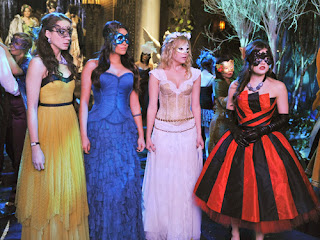 Tonight, we were promised that we’d learn the identity of A. So..who was it?

A wants their phone back. So, it only makes sense that A would cordially invite the girls to the Masquerade Bash. Another dance? Why does this town have so many dances? The girls spend the majority of the episode being incredibly stupid and investigating what Alison was doing the days before her disappearance. They realize she stayed at a creepy motel in the middle of the woods. Looks incredibly safe. So much so that Hanna thinks it’s alright to just take a shower there. When she’s left alone in the room, A pops in to say hi…or to just..watch Hanna through the shower curtain. Weirdo.

The girls are getting ready for the dance when Spencer tries one more time to get Toby to forgive her. No dice. When she leaves, he gets a call from Dr. Sullivan. What? Is he a patient? Before the dance, Jenna goes to see someone in the woods. She’s “Glad to see them again.” Then, she gives them something wrapped up in some cloth. What is it? I have my theories but more on that later. She tells the mystery person that the girls are all at the dance and “you know what to do.” Hmmm.

Caleb and Fitz show up to the dance to be knights in shining armor for their girls. Emily is walking around trying to convince Spencer to come back to the dance. She left with Mona because she figured out a clue. The hotel room was rented out by A and Alison stayed next door to spy on them. They get inside and it is insane. The entire room is wall to wall pictures of Alison and the girls. It’s A’s creepy, psychotic lair.

Mona is in the corner chewing her gum and tells the Spencer to warn the girls that someone dressed as the black swan at the party has to be A. Spencer finds Alison’s diary among the rubbish and inside is a gum wrapper. Spencer turns around and Mona is in her little black hoody.

Are we supposed to be intimidated by Mona in that hoody? She looks like a smurf. There’s no way that’s the person who threw Ian off the bell tower or attacked Emily in the green house. She knocks Spencer out and takes her on a crazed chase in her car. She tells Spencer she can either “join the A team” or get shot with her dad’s gun. How did Mona get the gun? Spencer calls her friends secretly and they meet up with them half way when Spencer escapes from the car.

Mona and Spencer struggle and Mona is hurled over a cliff.

But she’s not dead! She’s just now in a psych ward. Dr. Sullivan reappears to say that Mona threatened her son and only came back because Toby insisted. Spencer and Toby get back together. Blah blah. Someone in a red coat visits Mona in the hospital. Mona tells them “She did everything they told her to.” So is Mona just A’s pawn? Are there more than one A? Marlene King is going back on everything she’s said in the past so right now your guess is as good as ours.

Were you disappointed with the reveal?

Oh yeah. Maya is dead. The ending is reminiscent of when Maya tells Emily they found Alison’s body.

We’re really trying to avoid spoilers around here but the sneak peeks are so intriguing! It looks like Melissa is still suspect number 1 with the girls. That makes me think she’s not guilty at all. Just crazy. And a bad sister. Either way, here are sneak peeks from the season finale of Pretty Little Liars: unmAsked. Who is A?

Update: Be sure to check out our recap of the episode (and the reveal of A’s identity) HERE 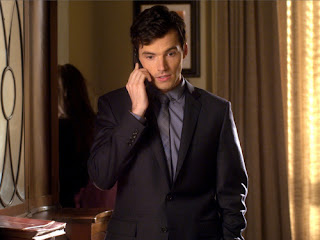 We all know that next week on Pretty Little Liars, the identity of A will be revealed. I have been suspicious of almost every single character on the show at some point. With this week leading up to the season finale, we thought we’d explore some of our favorite A theories out there. Of course, you can share some of yours as well in the comments! Who is A?

My absolute favorite theory out there is that Ezra is A. I was convinced back in season one when Ezra made a speech to his class about something he was teaching where a character seemed charming but was actually dangerous. I’m paraphrasing. “He was more than just a pretty face, he was ambitious, ruthless, charming.” At the time, everyone thought the episode was hinting at Noel. Especially when he drew the A on his paper and gave it to Ezra. I refuse to believe A is anyone shown to be suspicious on the show. I think this was referring to Ezra.

Ezra is an English teacher. A is a big fan of references to literature throughout the series. He probably surfs on bn.com for creepy novels to play off of. Off the top of my head, the tombstone in the graveyard had a great literary quote on it, A has referenced Tom Sawyer, and there have been multiple references to The Great Gatsby. And then we have Lolita. Alison loved this book. The story is about an English teacher having an affair with a younger girl. Sound familiar?

Three of the girls have been up in dangerous situations where they were almost killed. Aria hasn’t. Maybe Fitz is working with someone and has grown fond of Aria. There were many opportunities to reveal their relationship to everyone but something always got in the way. I also recall a few of A’s letters being written with a typewriter. Ezra’s typewriter has been shown a few times.

Remember how Ezra interacted with Jackie? One of the things that has always stuck out to me was how angry Ezra seemed in one scene in particular. He’s having a drink, looks up coldly at Jackie and says “It’s a bad idea to wake a sleepwalker.” I really have no idea what this could be referring to but it was very ominous to me. Like it was foreshadowing something.

Maybe watching LOST has spoiled me but I really want the A reveal to be a huge twist. Something fans wouldn’t see coming.

So,what do you think? What’s your favorite A theory?

Next week, fans will finally know the identity of A. I personally have suspected almost every single character on the show. I have my favorite theories. Place your bets below!

I can’t help but not be thrilled when I watch the Muchmusic promo. The person coming up behind Emily sure looks like Maya to me. I was kind of hoping she was already dead and A was pretending to be her. This, combined with certain spoilers that are floating around, have me worried Maya might be A. That is definitely not who I’m hoping for. If that’s the case, I might want to throw this episode into a gas fire pit table. I think that would be pretty boring but who knows what they will throw at us.

The Cast of Pretty Little Liars React to A’s Identity 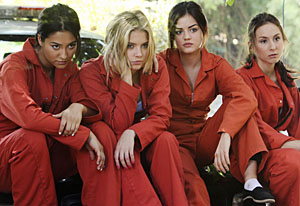 Fans of Pretty Little Liars are well aware that the identity of A will finally be revealed in the season finale. Or one of them anyway. The cast of the show talk about how they reacted when they got together to read the script for the finale. “Everyone’s jaw was on the floor.” They also reveal that it’s not who it is in the books. Who do you think it is?

Now, the cast is busy dropping breadcrumbs as to who has been behind the evil deeds that have plagued the characters since the series started.

“I had an idea because I read the books, but I didn’t know if they would keep the same person, and they twisted it,” Ashley Benson told EW last night at the People’s Choice Awards. “It’s not what it is in the books, to throw off the audience a bit. It was so cool. I think some fans have a good idea, but you’ll see as the season progresses.”

And if fans think they have it figured out now, they might want to wait before making their official guesses. “They made it complicated before the big reveal,” she says. “It was one of my favorite episodes we’ve ever filmed — everybody is masked, so you don’t know who’s who and that makes it creepy.”

And the revelation was so big, the cast wasn’t even allowed to know until the final moment. “We didn’t get the script, and it was a complete cold read for the whole cast,” says Lucy Hale. “We didn’t know what to expect, but once they read it, everyone’s jaw was on the floor. Ian Harding is always making commentary anyway in table reads, but when they read it, he just started laughing because he couldn’t believe it. But we were all in unison, yelling out different things. I think it’ll make people want to go back and watch the show from the beginning because there are clues and it all kind of makes sense.”

In fact, Keegan Allen recommends a series marathon, because, he says, the clues are all there. “You have to watch every episode to understand it, from the pilot through now, and then it will make sense. Everything is linked,” he says. “The writers did a really, really good job of connecting everything and making it realistic. … I’ve always had my ideas of who A is, but everybody is shocked.”

Above all, Shay Mitchell says, it will be a viewer-pleasing hour. “It was absolutely amazing the way the writers ended it for season 2. Honestly, the fans are going to be happy with it,” she says.” It was one of my favorite episodes to shoot, if not my favorite.”

Adds Allen: “It’s beautiful. It opens up so many possibilities with the show now. [It will be] interesting to see how it develops after the reveal of A because the girls have all the real issues that they’re dealing with as well. It’s nothing to shake a stick at.”

Hmm. Wouldn’t it be amazing if Ezra was A? Judging by Ian’s reaction my money is on him or Melissa being the reveal. Then again, I don’t think they’ll actually go there. Since jaws were on the floor, I don’t think it will be anyone that we’ve suspected already. Or maybe they will finally do the twin thing.