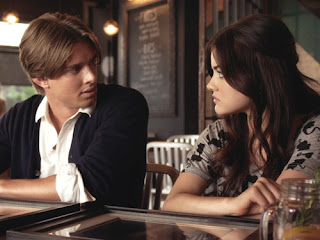 A is upping their game this week. Poor Emily can’t even eat her breakfast without A messing with her. A can now invade their cereals. First fortune cookies and now cereal? Does A have a part time job working in food prep? Hanna’s mom offers Emily a free massage gift certificate to help her relax. Emily being A’s latest special target has really made her stressed. So much so that not even a massage can help her. She seriously considers telling Dr. Sullivan the truth about everything. Long overdue in my opinion. Nothing is worth putting themselves in danger by not talking. Emily enjoys her massage but is shocked when the massage therapist comes in late. Emily got a special massage from A. How did she not feel the leather gloves? If she had looked up, would A have killed her?

Hanna plays along with her dad’s upcoming wedding and tries to get along with her step sister. With the encouragement of Mona, they end up on an ill fated horseback riding trip that has Hanna bit by a horse and traipsing through the woods on foot. When she gets back to the cabin, she sets her helmet on the intercom and accidentally announces to the entire place exactly what she thinks of Kate. New Kate (because the actress was also replaced to someone “prettier”) is really scary. She lets Hanna know that she’ll basically be her bitch from now on. Who does she think she is? Hanna has like zero obligation to ever talk to this chick again. Who cares if her dad finds out?

The girls worry about how close Aria is getting with Jason. Can they blame her? She’s obviously blinded by the abs. They tell her about the pictures they found in Jason’s shed and Aria is seriously creeped out. Somehow though, Aria grew some balls. Instead of hiding from the creepy guy taking pictures of her in her sleep, she walks right up to him and asks him why he has them, outing her friends for breaking and entering in the process. Jason doesn’t miss a beat and tells him that he didn’t take the pictures. Alli took them and he found them in a box hidden under her floor boards. He was going to frame them and give them to her as a gift. Um. Who would want that? And why would Alli take them? That’s just creepy and weird.

Spencer and Toby are packing up the rest of Ian’s things when they come across his yearbook. Spencer notices that Ian is listed as being in a club that doesn’t exist. The NAT club. Also listed as being in it are Jason and Garrett who were apparently all in the same class. Nice headshot looking yearbook photos. My yearbook looks like crap in comparison. Spencer finds a shirt with a latin phrase on it with the initials NAT. Translated it means We See All. This makes Spencer jump to the conclusion that they were all in on “seeing” all of the girls and making the pedo videos. She now believes that Jason would have killed Alli for the tapes.

Spencer panics and hops into Ezra’s car to warn him about Aria and Jason. She tells him she knows that they’re together and that she believes Aria is in danger from Jason. Fitzy and Aria have been on thin ice after Aria voices her annoyance at Jackie always being around. She also confesses to Jason kissing her. This doesn’t stop Fitzy from driving his car right on over to Jason’s house to grab Aria away. He tells her he doesn’t want to lose her and if becoming an “out” couple will save them then he’s willing to do it. Jason walks in on them kissing and it’s probably the most awkward scene ever. Just when I think they’re going to hop out of the closet, Ella tells Aria she would feel betrayed if Ezra ever dated a student.

Spencer gets one more unwelcome visit from Jenna. She is sooo annoying. Why do they even talk to her anymore? Jenna warns Spencer about snooping around Alli’s murder and dragging Toby with her. Spencer snaps at her and lets her know she knows about her and Garrett. Jenna is visibly shocked and tells Garrett it’s time to talk to Jason. About what? When Garrett goes to see Jason we get like zero information other than Garrett asking if the two of them are still “cool.”

At the end of the episode, A makes one final appearance sitting down to chat with Dr. Sullivan. I’ve noticed a lot of fans seem to think Mike is A in this scene but I’m not so sure. I thought he could be working for A all along but Dr. Sullivan suggested him to another therapist. What do you think?

Check out these great sneak peeks at next week’s episode of Pretty Little Liars. What do you think will happen between Aria and Jason after last week’s creepy reveal? Do you think he’s A? I think once again Jason is wearing too many clothes here.