This is so exciting! Two of pop music’s biggest stars are joining forces for what NBC is describing as “one epic performance”. Lady Gaga and Christina Aguilera have been confirmed to perform together on The Voice. The season 5 finale airs tonight on NBC and the network has rounded up some amazing performances. Celine Dion, One Republic, and NeYo will also be performing.

The latest winner will be revealed during the two-hour show. It will be a first for both Adam Levine and Christina Aguilera after fellow judge Blake Shelton ran away with the win every other year.

END_OF_DOCUMENT_TOKEN_TO_BE_REPLACED 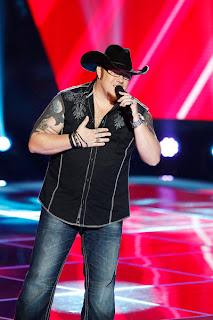 Michael Austin rocked the house this season on The Voice. The deputy sheriff got both Shakira and Adam Levine to turn their chairs around as he performed Keith Urban‘s “Somebody Like You.” The Country singer eventually chose to be on Team Adam and made it to the battle rounds before being eliminated. We recently got a chance to chat with Michael about his time on the show, any future album plans, and what’s next for him.

Check out our interview with Michael Austin here:

PopCityLife: What inspired you to try out for The Voice?

Michael Austin: Just getting to that point in your career when you want to go up against the best of the best. I figured if any show or audition was gonna show me where I was at as far as who’s who of vocalists in the nation, that would be the one.

PCL: Were you a fan of past seasons of the show?

Michael: Yes, I was. It was kind of refreshing to see a show like that come into play.

PCL: What was behind your decision to join Team Adam?

Michael: I love Adam’s sensibility when it comes to certain things. He’s a showman. I’m actually a fan of Maroon 5 and their outside the box thinking. And I figured if anyone was gonna push me to the limits of what I could do it’d probably be him.

PCL: How would you describe him as a coach?

Michael: He’s very energetic. He’s a lover of music so he knows what he wants to hear. He’s starting to delve into the country side of it. It was kind of interesting working with him as a country artist. Especially into the battle rounds with Warren and I and his education as far as learning about country and how it works. He was real fun to work with.

PCL: You also got to work with Hillary Scott as a mentor. What was that like?

Michael Austin: Hillary is just amazing. Hillary is one of those vocalists and one of those people that’s at the top of their game and when you look at the success that’s been coming to them, you want to be a part of that. And she brought a lot of great knowledge to the table and good peace of mind. Hillary was the one who said just be yourself and keep doing what you’re doing. That was real nice for me.

PCL: Was it kind of crazy to get thrown into it meeting all of these successful musicians?

Michael: Yeah, I’ve been doing it for so long and I’ve met so many people but I’ve never had any of them focus on me, for my success, which was the cool part about it. Once Adam and Shakira turn you realize these guys are in it for you.

PCL: Have you worked with any other musicians before?

Michael: I’ve worked with Toby Keith and shared the stage with Billy Currington and Dierks Bentley. You name it and we’ve probably shared a stage with them.

PCL: Are you rooting for anyone this season?

Michael: I gotta stay loyal to the team. I’m a real fan of Sarah Simmons. I think she’s an incredibly gifted vocalist and one of the sweetest people I’ve ever met on the face of the planet. And the Swon Brothers became really good friends as we’ve been going through this thing together. So those would be the two that I’m really rooting for. I’m gonna pretty much root for everybody because when you’re locked into that show like we were you become friends with a lot of people.

PCL: Do you have any plans to release an album or record music?

Michael: I do. As a matter of fact I’m in song selection right now for my next album project and will hopefully drop a single sometime around September.

PCL: Are you still pursuing a career in law enforcement?

Michael: I actually went right back to work after the battle rounds. I went back to protecting the city I work for. It gets pretty crazy these days.

We want to thank Michael for taking the time to answer some questions for us! If you haven’t already, be sure to follow Michael on Twitter here.