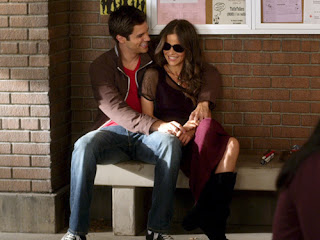 It’s Truth Day at Rosewood and more than a few people in this town are clinging to their secrets. And thankfully in this episode, some are finally revealed. Before they can think about Truth Day, the girls cash in Alison’s (or should we say Vivienne?) claim ticket. It’s a red coat. Inside a pocket is an anonymous phone number. The girls call it and leave a message hoping to get some answers on Alison’s secret identity.

Hanna is in hot water over sending the naked picture of Kate. It’s things like this that make the moms suspicious that someone is hurting the girls. Luckily for Hanna, she notices that Kate has a huge birthmark on her hip. A birthmark that was clearly not in that photo. She realizes that Kate photoshopped her body to look smokin’ hot and framed Hanna for it. Hanna accuses her in the bathroom and the girls are hiding in the stall recording Kate’s confession. They finally do something smart! Probably the only smart thing in the episode.

One of the first things I got out of this episode is that the principal is a total ass. Emily learns that he is the sole reason she is not back on the swim team and calls him out publicly during a truth seminar for discriminating against her and holding a grudge about her reputation. The principal calls her over to the side and basically says her problems are her own fault and she deserves every bit of it. What an ass! Depressed, Emily apologizes to Mona for never sticking up for her when Alison treated her badly. Bam! Emily has a new BFF. Mona makes it her mission to get Emily back on the swim team. She grabs Emily and hacks into the principal’s computer to print some files that prove he was bribed by a father of a male jock. Hmm. Mona is good at changing her voice and is a computer whiz? HMMM.

Jason is back in town and really wants to see Spencer’s dad. Can they just reveal what we all know is coming? Spencer overhears her mom and Jason arguing in another room and has a memory of a similar event. Her parents are downstairs fighting while Spencer is hanging out in her room with Ali. Spencer tells her they’re arguing because her dad caught Melissa making out with Jason. Alison finds the news delish because she knows what we all know. It’s incest! Melissa is macking on her brother. Spencer talks to Jason and he confirms that Spencer’s dad is also his dad. I’d be so pissed if I were Spencer and had such a hot brother.

Jenna is in a group with Aria and Caleb and doesn’t want anything to do with the day. She tells the entire group that everyone in that school is untrustworthy and she’s a victim. Caleb calls her out on her crap and it’s beautiful. Do we have to worry about Caleb now? Aria walks in on Jenna and Noel in a creepy dark room together being creepy and…creepy. They hope Caleb is missing? Why are they making the two of them so obvious? It’s annoying. Aria is avoiding Holden because she saw drugs in his backpack and jumps to conclusions. He assures her it isn’t what she thinks.

When Aria goes to the roof of all places to look for Caleb, the door locks behind her and a creep in a black hoody is predictably about to attack her. Aria decides to climb even higher on the roof and then a wild Noel appears! He grabs her leg and demands to know where Caleb is. What the hell? Why does he want to know if he’s not A? Holden comes out of nowhere with some Chuck Norris moves and attacks his ass and leaves him on the roof. LOL. This scene was amazing.

The girls receive a call back from the number and it’s a girl who wants them to never call her again. Then in the middle of the night, the number calls again and it’s a guy who wants to meet them to talk about Vivienne. Oh yeah. This sounds safe. While sleeping, A steals Caleb’s laptop. I’m sure he’s about to be framed for something. Poor Caleb.

Jason’s back! But uhoh, looks like Jenna and Noel are canoodling and scheming. What do you think they’re up to? Will Garrett go nuts and shoot Noel? How much trouble will Hanna get into for sending that naked picture of Kate? And what about Holden’s secret? Here are some great sneak peeks of next week’s episode of Pretty Little Liars: The Naked Truth.

Update: Read our recap of the episode here