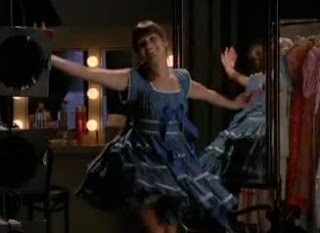 This is the episode everyone is talking about. Two couples will do the deed. Kind of. What I gathered from this episode is that Brittany was possibly raped at summer camp and she thought it was an alien invasion(was that supposed to be funny?), pity sex is romantic, and Artie is the glee club pimp.

The school is busy with preparations for West Side Story and Artie isn’t happy with his lead stars. He thinks they lack passion and should go out and lose their virginities right away. Because that’s totally a legit reason to have sex for the first time. Do they have to get married to act married? Artie is also all over Coach Beiste’s love life and convinces her to let the hot new football coach in. Not like that. But when he finally does ask her out, we get one of the best scenes of the night from Dot.

It may be unpopular but the other best scene of the night is not at all Klaine related. I actually thought most of their scenes were ridiculous. Blaine dancing around Kurt’s room talking about masturbation and then visiting Dalton to absolutely murder a Billy Joel song was really an interesting watch. Who is this new guy singing lead for the Warblers? I can’t tell if it’s the autotune or what but dude is nasal. I kind of want to stick a fork in my ear. Sebastion is a newly introduced Warbler and he’s more of a predator. He wants Blaine and couldn’t care less that Kurt is in the picture.

He invites them both to the local gay bar and Kurt agrees so he can prove to his boyfriend that he can try new things. Blah blah blah. And then..a wild Karofsky appears! Yay! Although :(. Dave has transferred to a new school where he can be happier with himself. It’s not clear if he’s out at his new school because he says more than once he’s just trying to “get through” high school. It’s so sad. But hey, he’s a hot bear cub in the gay community and he’s fine with that. Blaine gets drunk and wants to do Kurt in the back of his car. Kurt rightfully turns him down and Blaine gets pissed at him for not being spontaneous. Is that really a reason to have sex?

Rachel is having a better time getting advice from her friends. She calls all the girls together to ask what they think she should do. Quinn and Santana tell her to wait because they didn’t have great first times. Tina says her first time with Mike was amazing because they were in love. Mike was her first love? Artina :(. Finn is devastated when the football coach doesn’t show interest in recruiting him and thinks his dreams are over. Chin up buddy. You’re about to get laid in front of a fire while music from West Side Story plays. Klaine is doing it in their own room. Everyone’s wearing clothes and you don’t see much which is probably what you’re all wondering. My only comment is that even in bed, Blaine doesn’t wear socks.

This is the episode fans have been waiting for and the episode fans will be talking about for weeks. Two Glee couples are finally going to do the deed. But the real question is..why is Finn discussing this with his teacher? 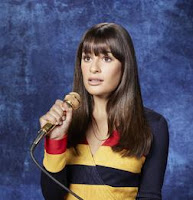 Check out the episode description for the fifth episode of season 3 of Glee. The First Time will feature some big changes for members of the cast and if the title is any indication, someone is getting some.

As the kids prepare for opening night of the school musical, several of them contemplate taking the next step with their significant others; meanwhile, Coach Beiste takes a big chance in her personal life; and Finn has high hopes when a college football coach scouts the school’s team.

Will Finn and Rachel finally do the deed? Will Rachel feel she needs to keep Finn from going away? And what about Klaine?