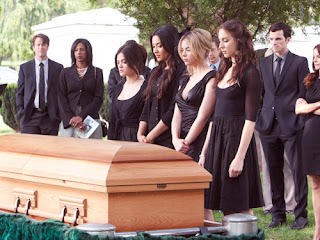 The girls are coming to terms with the shocking news that Ian killed himself and confessed to killing Alison. But did he? Emily is the only one with a brain in this entire episode and she knows this isn’t over. Spencer is just over all of the Nancy Drew-ness of their lives so starting with this episode, Emily is the new sleuth. And she kicks major butt at it. Anyone watching this show knows that Ian didn’t kill himself. I’m actually surprised when Garrett voluntarily tells Emily that Ian’s body has been dead for a week. This means that A was the one texting Melissa pretending to be Ian.

Okay. Hold the phone. Ian’s body has been dead a week? And yet the coroners can’t figure out how he originally died? Way too many episodes of Law and Order have shown me that autopsies are key. Especially when a murder is involved. Are the medical examiners just looking at the note and not even bothering? Let’s add these people to the list of dumbasses from Rosewood along with the police.

Poor Ian. Where’s his family? No one wants to give him a funeral and Spencer convinces her parents to throw him one. Hmm. Ian almost killed Spencer and her parents never believed her. Now it’s Spencer that wants justice for Ian and her parents want nothing to do with it? Fail. But it looks like all the parents of Rosewood are believing that murder confession Ian “left” behind. Emily runs into the guy that showed up with the ransom money last season and tells Garrett about it. Doh! I wish these girls knew he was up to no good. I wouldn’t really mind if Garrett “accidentally” got run over in the finale. It’s not long before Garrett pays him off before he can tell Emily anything else. He does let slip to Emily that the person who paid him to drop off the money was a woman and not Ian. I was reallllllllly hoping it would end up being Melissa but it looks like it was Jenna.

A person in a black hoody is caught trying to break in to Jason’s house. Jason catches them. Is it A? Maybe. But for now it’s Mike. Turns out Mike is the one who has been breaking into houses all over the neighborhood and it was Mike who hurt Aria at Spencer’s house. Sheesh. Aria barely got an explanation out of him. Why is he doing this? Is this just a red herring and we’re supposed to believe that Mike is just rebelling. B.S. I’ve been saying Mike was either working for or was A since episode 1.

At Ian’s funeral, Jason confesses to Aria how relieved he is about Ian. All this time Jason believed that he himself killed Alison. He blacked out that night and doesn’t remember a thing. He woke up with a note in his pocket saying “I know what you did.” Yikes. Is that an A note? What did he do? Once Emily realizes that the suicide note is just a mashup of all of A’s messages, they realize Ali’s killer is still out there. Who really killed Ali if it wasn’t Ian?

Spencer tries to find a knock off ring to buy Melissa to make her feel better but has no luck. She decides it’s time to confess to Melissa instead. Before she gets the chance, Melissa apologizes to her for choosing Ian over her. She just couldn’t believe that Ian was a murderer. Melissa then reveals that she has been lying to Spencer and has to tell her something. But of course she’s interrupted by a ringing phone. It’s Ian’s cell phone and it’s coming from inside Spencer’s bag. Melissa immediately morphs into the exorcist or something and assumes that Spencer has been pretending to be Ian this entire time. Grr! What was Melissa going to confess??

Emily gets one more message from A. It’s time for a night time graveyard scavenger hunt! Couldn’t they do this in the daytime? I mean seriously. They’re just looking for trouble now. The map takes them to Ali’s grave. It’s dark. It’s silent. And then BAM. Okay I admit when I heard Alison’s laughter a crazy part of me thought it was a ghost. But it’s a projection on the wall of the tape of Alison and Ian at the kissing rock the night she “died.” Same old same old..only wait. The tape doesn’t end where it usually does.

Yep. Turns out that tape was just Ian and Ali doing the deed. Most of us speculated it might be. And since it is, can I just say that Ian is uh..fast? Alison and Ian get up and walk away all smiles. So then..what the hell? The night Ian tried to kill Spencer, didn’t he say he pushed Ali and she never got up? Only to be told by Spencer that Ali died of suffocation? He didn’t push her when he was doing her. Is this a continuity problem? And Mike left to go out right before the scavenger hunt. Just sayin.