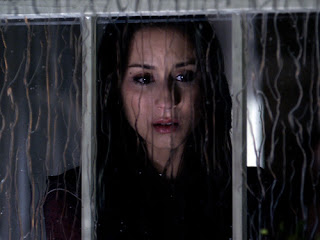 Pretty Little Liars fans who love the mystery will love this episode. Pretty Little Liars fans who love the relationships..well..you may be a little frustrated right now. But at least one couple stopped traffic. This episode started off great and dove right in to the mystery. The girls go over the latest of the video that Caleb was able to uncover from A’s phone. So far, they have video of Ian (yay Ryan Merriman is back!) setting up a hidden camera in Ali’s room. Before you groan at how gross he is, that’s not what he’s up to this time.

He wants to record the conversation he’s about to have with Garrett and Jenna about Alison so they can’t back out. It seems like they’re plotting about Ali having possession of the videos and Jason is passed out somewhere. Garrett opens Ali’s box and notices something weird inside. Whatever it is, we don’t get to see. OF COURSE. Caleb is getting a little tired watching suspicious and creepy videos and not knowing what’s going on. When Hanna freaks out about what he knows, she throws the flash drive of the new videos he’s uncovered into a blender. NOOO HANNA! Thankfully, Caleb is one of the only people on this show with a brain and has made a copy. He’ll show it to the girls and continue to help them if they hide it from Hanna and tell him what’s going on. They give him a Reader’s Digest version of events and basically just tell him Garrett and Jenna are trying to frame them for Ali’s murder.

There’s a lot of lying going on in this episode. Spencer comes to the decision to lie to Toby about how she feels when A takes the next step and hurts Toby after Spencer fails to stay away from him. Toby falls from the tampered scaffolding and breaks his arm. He’s lucky that’s all that happened. Spencer begs Emily to tell Toby that she’s seeing Wren again. Wren is up front with Toby and tells him he kissed her when they were on a break. Friends flashbacks anyone? Toby threatens to kick his ass. LOL. Whatever Toby. He then gives Spencer back the truck she bought him and disappears. I want to care more but I don’t.

The girls look at their box of Ali stuff and discover the threatening notes from A that Alison had been hiding. Flashback to Halloween when someone had vandalized Ali’s porch. I’m more interested in the random line that Spencer says. When Hanna asks her if Melissa and Ian are going to get married Spencer replies “Probably. They’re perfect for each other.” This just stuck out to me especially after last week. Could Melissa be just as crazy as Ian? Are they going down the twin route here with Ali?

Mona and Hanna rekindle their friendship after Noel is a massive douche to Mona in the hallway. Mona makes some comment about Noel’s eyes (EYES!) and Jenna starts having dinner with him. Hmmm. Can’t Jenna see? Didn’t she just leave for eye surgery? Is she still recovering? The girls are more interested in questioning Holden’s sexuality. He confirms to Aria that he isn’t gay but he is hiding something. If the secret isn’t him being gay and in love with Aria’s brother, I have lost all interest in his character all together. Ezra agrees to meet Aria at a bus stop in the rain somewhere where Fitz parks his car in the middle of traffic so they can make out in the rain. Dude, you’re so gonna get a ticket for that one.

Here are a handful of sneak peeks at Monday’s new episode of Pretty Little Liars: The Blonde Leading The Blind. Is that some kind of metaphor for Alison and Jenna? And is Toby really in danger? Caleb looks like he’s getting too curious for his own good. How high can that scaffolding be? Place your bets people!

Update: Check out a recap of this episode here

More than one familiar face returns in Monday’s new episode of Pretty Little Liars. There also looks to be some more screen time for the new hunk of the show Shane Coffey. We have both the ABC Family and Canadian promos here and..dare I say it..is Toby in danger? A really wants some revenge.

Catch up on the first season!