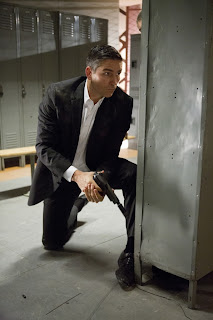 A sad day has arrived for Person of Interest fans. The Winter finale has come and gone. If you were worried the show would leave you cold and feeling lost without your favorite badass duo, think again. This show always delivers the awesome and tonight was no exception. Especially when you’ve got an ending of the cliffhanger variety.

Check out our recap of the can’t miss moments from tonight’s Winter finale: Shadow Box.

In case we had forgotten what an adorable married couple Finch and Reese have become, let the show remind you. An opening scene involves the two of them bathing Bear together..in the middle of the library. Don’t they have a bath tub? I’m not complaining. I am quite enjoying this image. Along with Harold hopping on the back of a motorcycle? This episode is starting off amazingly. Carter must really love these guys if she continues to put up with their constant surveillance of her life. But fear not, Carter. John promises you to tune out if you feel like doing the deed with your new man. What a gentleman.

Carter knows she can trust John but can she trust her new flame? Something is shady about this guy. It could just be the meetings he’s having that HR is keeping an eye on. Lionel is stepping on a lot of toes keeping tabs on this guy for Carter. I’m starting to get a little worried for Fusco’s future..and mortality. His butt can’t always catch the bullet.

The Man in the Suit

Early on in the episode, John mentions how happy he is with his life and his new job with Finch. Yep. If that’s not a case of foreshadowing and jinxing yourself, I don’t know what is.

The FBI has a new strategy in catching our man in the suit. They’re monitoring the phone patterns between Finch and Reese and use that to track him down to his current location. The latest number takes John into a bank to prevent a former marine and his girlfriend from blowing it up. When he learns that they’re just preventing other veterans from being taken advantage of by a crooked charity, John decides to help them instead.

When three gun toting goons join the party along with the FBI, John realizes there’s no way out. He apologizes to Finch for screwing up and thanks him for the best job ever. As Carter walks in with the other agents to celebrate catching the Man in the Suit, they realize John is not alone. He’s standing with the three other goons, all of whom are wearing suits. With Carter “unable” to identify who is who, it looks like John may be trading in his work suit for a jumpsuit.

What did you think of the episode? Sound off below!