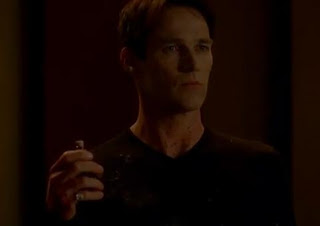 So much was going on during last night’s True Blood season finale that it’s hard to imagine them cramming in any other scenes or raising anymore questions. They saved it for us to ponder once the episode ended. In this bonus scene from Save Yourself, Jason wonders out loud about where Warlow is hiding so he can shoot him. Someone listening to the conversation asks him “What do you know about Warlow??”

How will this factor in to next season? Have we met Warlow before? Who will be the bigger villain? Him or Billith?

Check out our recap of Save Yourself here

Also, check out the Inside The Episode for the season finale Save Yourself:

Because my brain hasn’t quite comprehended the INSANE events of tonight’s True Blood season finale, the recap isn’t quite happening. However, here are the biggest spoilers of the night that everyone will be talking about tomorrow.

Who lived, who died, and who made out in the season finale of True Blood: Save Yourself:

Let’s start with a body count shall we?

Tara rescues Pam and then they MAKE OUT. Huzzah!

And I’m sure you’re wondering about the massive cliffhanger we always get come season finale time. Well, this one is a doozy.

Bill drinks all of Lillith’s blood and then DIES.

Okay. Let’s back up. Did HBO just pull a Boardwalk Empire and kill off the leading man? Well it certainly looks like it. And just as I’m sitting in my chair chanting “WTF WTF” with my hands on my face like I’m Macaulay Culkin on the cover of Home Alone…Bill rises up from his puddle of goo and roars like a lion.

True Blood season finale preview! The episode, Save Yourself, vows to be a bloody, action packed hour of television with the war of vampires against faeries and humans heating up. I would actually love if this year’s finale didn’t just end with the villain of the season getting killed off. I know a bunch of characters will probably be killed off in the finale, like they always are, (and I kind of wish they would just take Bill at this point and save Russell and Steve) but it would be great if the war carried over to the next season. With all of this build up, it would be great for it to continue.

If it means Jason will wear more of that spy gear, I’m all for it. But seriously, take Bill. And Luna too. And give Alcide something more interesting to do. I’m finding myself falling asleep during his scenes and that’s not okay.

Who will make it to next season?

Watch the preview of next week’s season finale here: