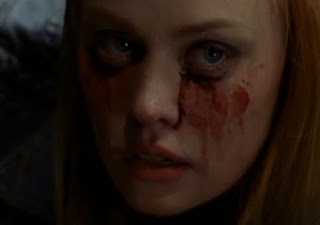 Alcide is running through the forest carrying Sookie’s lifeless body when Bill turns up and snatches her because he runs faster. He attempts to give her his blood but she’s not taking it and she barely has a pulse. Sookie finally wakes up and the first thing out of her mouth is “Where’s Eric?” Bill and Alcide try to talk some sense into her but Sookie is pretty daft when it comes to the guys she loves. Alcide is pretty much like “F*ck this sh*t” and gets out of there. Smart guy. He goes back to Debbie who smells Sookie on her. Will she go after Sookie next? What I got out of this scene is that Alcide sleeps in the nude. 🙂

Alcide offers to join Marcus who has a need for him to be a body guard. Marcus wants to settle things with Sam and goes to Merlotte’s to invite him over for a talk that will probably just result in his beating. He meets Tommy instead who immediately doesn’t like him. Tommy goes to the meeting shifting as Sam and gets cocky. I can’t see how he’s helping Sam by doing this but it’s not long before Tommy is such a bloody pulp that he shifts back into himself involuntarily.

Hoyt is boxing up Jessica twilight books and Taylor Swift cds when a very possessed Lafayette strolls into the house with Arlene’s baby. Hoyt barely has time to register the weirdness before faux-Lafayette pulls a gun on him and kicks him out of the house in his underwear. Hoyt immediately calls Jason and Andy for help and some pants. Along with Arlene and Terry, they head on over to the house but get nowhere. It’s not until Jesus shows up and goes inside to try and work some magic on the spirit inside Lafayette that they get anywhere. She finally understands that it’s not her baby and they help her find where her and her baby’s body is buried. Then some weird stuff goes down and she floats on up to heaven with her baby. …Okay.

Jason may have not been able to contribute much to that cause but he’s able to contribute quite a bit to Jessica’s lady parts when he shows up to deliver her box of stuff. And in the back of his truck no less. Poor Hoyt. He’s not gonna be happy when he finds out.

After having so much of his blood, Sookie starts to imagine a world where both Eric and Bill can be “Hers.” Where she is not the property of one man and where threesomes with two hot vampires is the logical thing to do. It’s a nice fantasy world but it’s not going to last. In reality, Eric is under Antonia’s control and has been ordered to kill Bill. Debbie helps Sookie break into Antonia’s shop where she is holding all of her minions hostage. They’re all turning on her and want nothing more to do with this crazy crap. Tara catches her and holds her at gunpoint as a way to actually save her life. Sookie escapes to warn Bill at his rally that he’s in danger. Mayhem ensues when Eric shows up killing people and the episode ends.

Spirit: Thank you Lafayette.
Lafayette: You got it, bitch.

Jason: Hoyt wants us to bring him some pants.
Terry: We don’t have time for that.
Andy: It’ll only take a minute and I don’t wanna see that sh*t.