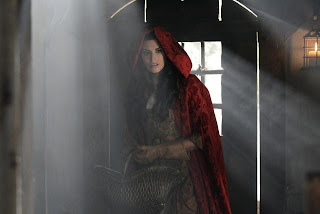 I was really eager to learn more about Ruby’s backstory and her time as Little Red Riding Hood in Fairy Tale Land. Red and her Granny are worried about the monstrous wolf that is terrorizing the village. While gathering eggs before they hide in their house, Red finds Snow hiding with the chickens. She invites Snow to stay with them, no questions asked. The friendship is born!

Back in Storybrooke, Ruby and Mary are still friends. When Ruby quits working at the diner in a huff, Mary offers to let her stay with them. Emma meanwhile, gives Ruby a job as her assistant. Ruby has a lot less confidence than Red. She doesn’t think she’s even capable of answering a phone, let alone helping Emma find David. David has gone missing after being questioned about Kathryn. Mary finds him wandering around the woods dazed and confused and goes to get help. Ruby finds him unconscious and he doesn’t remember how he got there. His doctor thinks he’s having a sort of amnesia episode. Is he remembering?

In Fairy Tale Land, Ruby is feeling pretty confident. She tells Snow that they’ll be heroes if they kill the wolf together. They follow his prints through the snow and are shocked when they not only morph from wolf to human, but they lead right up to Red’s cottage. Red’s boyfriend Peter was just visiting her. This leads them to the conclusion that Peter is a werewolf. Ruby sneaks out without her red cloak and offers to tie up Peter in chains to protect him from killing anyone else. When Granny hears from Snow what’s happening, she rushes to the scene. Peter isn’t the werewolf. Red is. Twist! Her red cloak prevents her from changing. It’s such a shame she ate her boyfriend. He was hot.

David is worried about these new episodes of his. If he can go hours without remembering what he’s doing, he believes he very well could have made that final call to Kathryn. Not only that, but he worries he could have killed her and not realized what he was doing. Ruby goes searching near where Kathryn disappeared and finds a box that was buried by the river. I guess she found that with her wolf-like sense of smell. Inside the box is a human heart. Ack! Is it Kathryn’s? More disturbing is when Emma goes to break the news to David and Mary. David offers himself to be arrested but Emma tells him his fingerprints weren’t on the box. Mary’s were. Is Regina framing her?

Anyone else excited to learn about Ruby and her time as Red Riding Hood? Any guesses who the wolf will be? I also wonder how her and Snow got to be such good friends. Here are some sneak peeks of Sunday’s new episode of Once Upon A Time: Red-Handed.

Who is ready to meet Red Riding Hood? I’ve been curious about Ruby’s backstory since the Pilot episode so I’m excited for this one. She’s so pretty. Will someone from Storybrooke be the wolf? Here is the promo/preview of next week’s new episode of Once Upon A Time: Red-Handed.