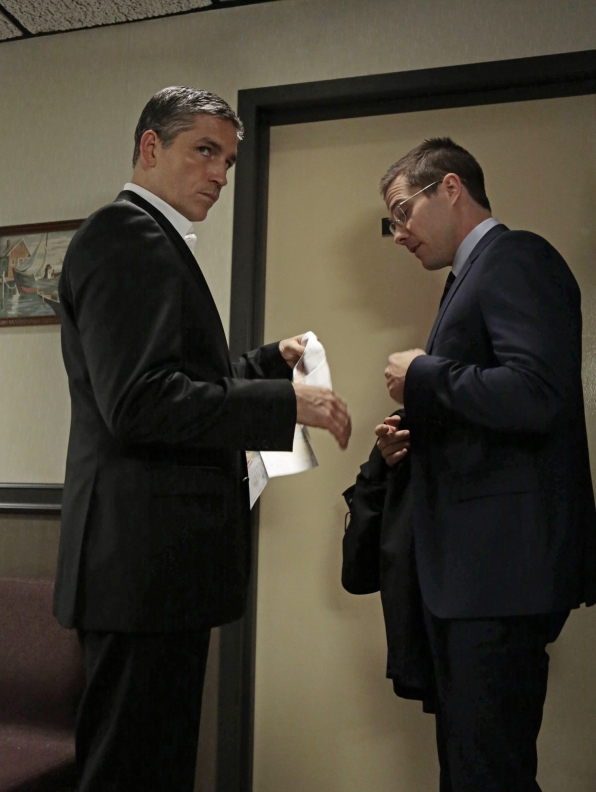 This episode of Person of Interest was the best in a long time. I loved it. There was something different about it tonight. I felt myself literally inching further toward the edge of my seat the entire time. An episode with a mixture of a murder mystery dinner and a game of Clue, the hunt for a serial killer has never been more intense. And don’t get me started on that ending. Even if you saw it coming, and most of us probably did, the acting from everyone involved was fantastic. We saw a new side of Finch tonight and I’m sure the gifs from this episode will be glorious.

This episode was not one to be missed.

The boys find themselves stranded with a group of questionable people during a huge storm that’s evacuated the area. You would think that would be enough to worry about but the Machine has a bit of a cold. After three days of radio silence it spits out six numbers all at once. Different identities from around the country.

These are the identities of the victims of a crazed serial killer. He relocates after each victim and takes on their identity. The better news? The boys, the FBI agent tracking the guy, and the small group of questionable people are all stranded together. And one of them is the killer.

The episode continues on and I feel like I’m watching a horror/suspense thriller. And it’s awesome.

So who’s the bad guy?

Well, it’s not the mom from Freaks and Geeks. And it’s not the dad from The Wonder Years. It’s the cute FBI agent. And he’s stolen Finch’s glasses. What a douche!

This scene between the killer and Finch is probably one of my favorite scenes throughout the series. It’s just that good. Two great actors playing off of each other is a recipe for success in my opinion. Well done Mr. Emerson. Well done.

Oh. The LOST flashbacks are killing me softly. Thank you Tumblr:

He’s fine. Carter saved his ass while John is playing with marijuana on a deck somewhere.