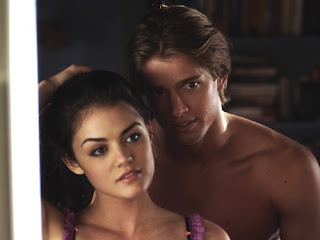 The girls worry as Jason gets more suspicious every day. Personally, I think he’s just a red herring and they’re trying too hard to make him look guilty. But this episode really threw that theory of mine for a loop and made it difficult for me to defend his actions. Then again, I also thought Jenna was a red herring but she gets creepier every week.

Aria isn’t worrying about Jason until she starts to have naughty dreams about Fitz and Jason. Ezra is a welcome presence in her dreams but Jason is not. Aria panics that she’s been unable to connect with Ezra lately and starts to push Jason away. She ambushes Ezra in his office so brutally that I’m so sure it’s a dream until we see that it’s..not.

Emily sure is worrying though. A is relentless against her this season. A begins blackmailing her with her lab results and forces her to give her number to one of Samara’s friends. Samara finds out and dumps her immediately. Pssht. Whatever. I don’t care. These girls should seriously ignore their phones. It’s so obvious A has their houses bugged or something. They should really hire someone to look around.

Hannah isn’t having any more luck in the relationship department. It turns out that the cop that was following Caleb was a private investigator. He was hired by Caleb’s real mother to find him after all these years. Caleb calls her and announces he’s going to California to be with her. Is Caleb going to come back? Does this open up an opportunity for Hannah to get back with Lucas? Too bad Noel is such a creep. They have great chemistry.

Spencer spots Jason hiding something in his shed and convinces Emily to tag along and break in to find out what’s inside. These girls are so gutsy. And stupid. The preview unfortunately spoiled what’s inside for me so I’m not exactly on the edge of my seat here. I can’t however explain it away in Jason’s defense. It’s a dark room for developing pictures. Creepy thing is, they’re all of Aria. Not so creepy? Well, she’s asleep in them. And the girls find surveillance equipment inside as well. What the hell Jason? How can you explain that without looking like A? I don’t believe Jason’s A but I do think he’s a creeper. Not quite as awesome as drinking a glass of milk though.

Aria is walking alone at night (idiot) and Jason pulls up next to her and gets out to confess his feelings for her. They kiss (yay!) but Aria tells him she’s not available. Dang girl. She has more will power than I would have had. Aria doesn’t yet know about the pictures so I’m quite curious how Jason is going to explain that one. It’s not exactly artistic if she’s asleep in all of them.

Even creepier is Jenna and Garrett watching all of this from afar. Why do they care so much about Jason? What’s The Jason Thing? They’re worried Jason is going to remember more from “that night.” Ugh. Cliffhangers. Jenna is also looking into surgery to correct her blindness. Gasp. Will she succeed? I was kind of hoping if her being blind is cured..we wouldn’t know about it until a shocking reveal or something. Also, what the hell is up with Mike moping in bed?

Spencer and Emily go BACK to the shed to get proof for Aria. Why wouldn’t Aria believe them? The shed is completely empty when they return. Did Jason empty it? Or did A? The ending of the episode shows someone with gloves developing a picture of Spencer and Emily inside the shed. Is A or Jason developing it? Are they the same person?