Nick Jonas is headed to Hawaii. The multi-talented star is headed to the Aloha State for a guest starring appearance on season 4 of Hawaii Five-0.We last saw Nick on NBC’s Smash so this should be an interesting turn. Will he play a good guy or a bad guy?

The Jonas Brothers band member will guest-star on an upcoming episode of Hawaii Five-0, CBS announced Tuesday. Jonas will play a computer hacker with questionable motives involved in a case that the Five-0 team is investigating.

END_OF_DOCUMENT_TOKEN_TO_BE_REPLACED 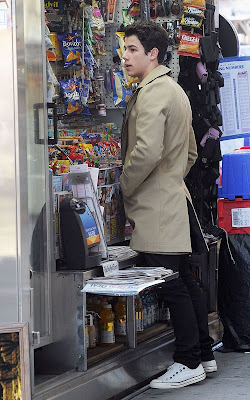 He may be a millionaire already but Nick Jonas joined the rest of the country and bought himself a lottery ticket. The jackpot was a record 656 million dollars and will be split among three winners. I doubt they’re suffering from having to share the huge prize. What would you do with the money if you won?

I didn’t buy a ticket. I actually forgot all about it. Plus, I’m kind of a pessimist. As a kid I would borrow my brother’s metal detector in the hopes that someone would buy silver coins that I found. I always gave up after 10 minutes.

I think I would buy my favorite actor with my winnings. Kind of like my own personal art piece I could just stare at in the living room.