Jim Parrack on Hoyt’s Dark Side 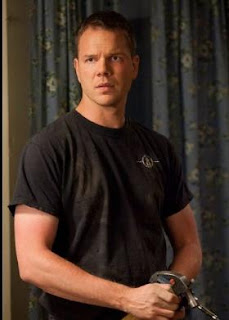 Jim Parrack talks True Blood and his character’s dark side and what’s ahead for Jessica and Hoyt. Most important of all, he tells us what it’s like to ride Jason Stackhouse.

I still haven’t seen that, but to play the cowgirl straddling my buddy? [Laughs.] That was a very interesting scene to shoot, to say the least.

Did you have any inkling that Hoyt and Jessica were headed for all this domestic trouble?
The general rule is to not jump into moving in with whoever you’re nutty for. But, you know, I was in a bad relationship, and the day I got out of it, I moved in with Ciera, and she ended up becoming my wife. Then again, I wasn’t facing issues like, “My mother is trying to kill my girlfriend.” [Laughs.] Now Hoyt and Jessica’s issues are more like, “I’m hungry. Where’s my food?”

Or in Jessica’s case, “Who’s my food?” But, really, why can’t Hoyt make his own food?
If you went off and worked hard and came home to another person whose only obligation was to watch TV and enjoy herself, things might go badly there, too. She knows I have to eat, too, so couldn’t she make some effort? [Laughs.]

Hey — she’s pulling the night shift at Merlotte’s. And she’s keeping a video blog. Where’s yours?
I met some fans who said, “Please start Twittering!” They even walked me through it, but I’m terrible at it. I’m so bad at keeping it up. I forget how to use it. And I’m not very savvy: I try to send a private message, and it goes out to everybody.

That could be embarrassing. Though probably not as embarrassing as making a cameo in Jason Stackhouse’s sex dream?
I still haven’t seen that, but to play the cowgirl straddling my buddy? [Laughs.] That was a very interesting scene to shoot, to say the least.

Once the inevitable happens between Jason and Jessica, will we see a darker side to Hoyt?
Well, Hoyt’s father is dead and gone. His mother is dead to him. So he only has two people left: the love of his life and his best friend. And if they’re gone, what is there? That’s the kind of thing people kill people over, or destroy their own lives over. And Hoyt is somewhere between those two poles. He has nothing now. People took him for granted and misused his love. So I think we’re just barely scratching the surface of how dark he can go.

Think he could take Jason in a fight? I mean, you’re pretty big, and yet here you are playing the “sensitive” guy.
It’s crazy, right? But there’s something about people who are so loving that when they snap, it’s no joke. There are definitely some volatile moments coming up. It’s not going to be pretty.

Your film with James Franco, Sal, about the late Sal Mineo, is premiering at the Venice Film Festival later this month. What can we expect?
There’s some great material. It’s amazing to me that Sal Mineo was getting nominated for Oscars [for Rebel Without a Cause and Exodus] but then when he came out as a homosexual, he lost everything. Val Lauren plays Sal, and he is going to fucking blow people’s minds. He is going to break your heart and make you fall in love with Sal — how he kept his dream alive, how he wasn’t bitter, how he wasn’t blaming anyone, up to that last tragic moment. I play Keir Dullea, who was the lead actor in 2001: A Space Odyssey, and he and Sal were doing a play together, P.S. Your Cat is Dead, and they were in rehearsals when Sal died. Basically, Val and I learned the play: We rehearsed it as our characters would, with James playing the director of the play, and that’s what we shot, in three 45-minute takes.

Did you call up Keir Dullea to get any tips on how to play him?
No. Look, if I do that, he might tell me things that could go against my instinct. I don’t know if he was bisexual, but I sensed that about him, so I took that idea to James, and we incorporated that. Not in an obvious way, not that I’m flirting with boys, but just suggesting that it’s possible.

If an actor were to ever play you in a biopic, what advice would you have?
I’d say she better be very pretty!