This is a tad embarrassing. Jennifer Lawrence recently appeared for an interview with Conan O’Brien and somehow, the discussion turned to maids. Jennifer launched into a story about a maid discovering a secret stash of sex toys under her bed. Jennifer claims that a friend gave her a bunch of toys as a prank and had attempted to hide them away from prying eyes. When she returned to her room, a maid had laid them out on her bedside table for her.

END_OF_DOCUMENT_TOKEN_TO_BE_REPLACED

The Hunger Games: Catching Fire had a lot to live up to. As the sequel to one of the most profitable films of 2012, many were unsure if Catching Fire would live up to the hype surrounding the series. When Francis Lawrence replaced Gary Ross as director, fans waited with baited breath to find out how this installment would fare. I can safely say that Catching Fire is the perfect sequel to the first movie and in numerous ways tops The Hunger Games around every bend.

END_OF_DOCUMENT_TOKEN_TO_BE_REPLACED

Most Anticipated Movies of 2014

Another year gone, another year to come, eh? 2014 looks to be a very exciting and enthralling new frontier for film. Join me as we delve into my list for the most anticipated films of 2014.

END_OF_DOCUMENT_TOKEN_TO_BE_REPLACED 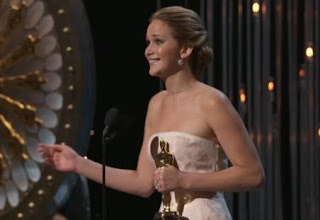 Easily the most talked about moment of the night at the 2013 Oscars; Jennifer Lawrence took home the award for Best Actress for her role opposite Bradley Cooper in Silver Linings Playbook. That’s amazing as it is but all anyone seems to be talking about is her fall as she walked up the stairs to accept the trophy. She played it off like a champ, face palmed and got herself up again as three gorgeous men (Bradley Cooper, Hugh Jackman, and Jean Dujardin) rushed to her aid. Maybe she should have fainted.

Definitely my pick out of the category, I’m glad she took home the award last night. While I think Bradley Cooper was the best in the movie, the competition in his category was too fierce this year. All in all, I’m glad the movie is getting the recognition it deserves.

Did we mention how hilarious she is in her press conference afterwards? “Sorry. I took a shot before this.”

Check out the video of her speech, her fall, and her hilarious and charming press conference here: