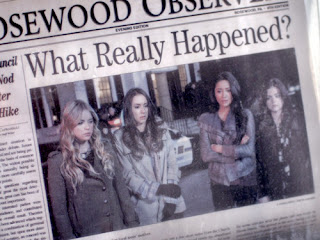 Pretty Little Liars is back and picking up right where they left off. In fact, the girls are still being gawked at in front of the church when the episode begins. When we last left the girls, Spencer had just been attacked by Ian who tried to kill her in the bell tower and make it look like a suicide. Ian’s body then disappeared once the cops showed up. Garrett shows up and tells the girls the must leave with him before going to the police station. Alone? Without their parents? Don’t these girls learn??

Read the rest of the recap with a bonus picture of shirtless Ian Harding from the premiere:

It’s reminding me a bit of that scene from Harry Potter and the Goblet of fire when Harry left without Dumbledore and almost got himself killed. Don’t trust Garrett girls! In fact, I almost wanted to scream at the tv when he pulled his squad car into a dark alley and told them all to get out of the car. I half thought he was going to try to kill them all. But alas, he only wants to save his own ass. He wants the girls to keep quiet about the group of them blackmailing Ian so they aren’t all in bigger trouble then they already are. We know what he really wants is those videos. But why? And why is Jenna creepily standing on a corner by herself staring(?) at them all? Just when you think that girl couldn’t get creepier, her and Garrett sit outside Allison’s old house where apparently Jason has moved back in. What? Why? And now there’s a “Jason Thing.” Oy. I can’t keep track of all the people I’m suspicious of. I think I need a pie chart.

One thing I have learned from this episode is that these girls have the worst parents ever. Seriously. Especially Spencer’s. Which is odd because I loved Spencer’s Mariska Hargitay twin of a mom last season for being bad ass. With rumors swirling and the entire town gossiping about the girls, none of the parents believe their children. They want to send them to therapy instead and cut them off from each other. Toby is the first to go. When he awkwardly knocks on the door to see Spencer during this intervention (worst timing ever), Spencer’s dad answers the door and basically flips him off with his words. Poor Toby. Actually, Poor Spencer. Her family sucks. No one in that house believes she was almost KILLED and the guy who did it was murdered. Melissa is home from the hospital inquriing about a search for Ian and wants nothing to do with Spencer. 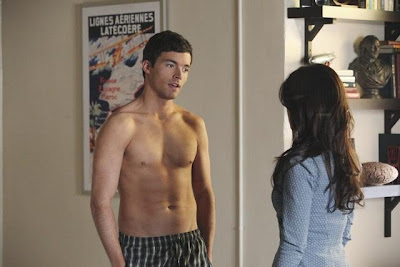 Aria shuts out Ezra who is adorably flummoxed at the possibility the two of them could ever be over. Aria decides to give him one more chance and goes to see him at his apartment. Fitzy answers the door shirtless. Who doesn’t? Aria drills him about his relationship with his ex girlfriend and I really couldn’t care less. It’s easily the most boring part of the night and I really can’t be bothered to pay attention when Ezra makes no motion to put on a shirt at any point in this entire scene. Not complaining. Aria gets an unwelcome shock when A ups their game. A sends her a picture message from inside Ezra’s apartment telling her that something is missing. Oh no! Change his locks! What’s missing? Can you really send a picture text from an anonymous number? I spent 60 bucks a month with Sprint and still can’t get my phone to do that.

The girls begin group therapy together with a grief counselor and ponder over whether they should tell her everything. A, Ian, Allison’s murder, basically everything that they actually need a therapist for. Together they decide that it might be the right thing to do because legally she’s not allowed to tell anyone anything they say. She tells them the only situation where she can is if danger is involved..I think their situation qualifies but they aren’t perturbed. Just as they’re about to show her some videos, Spencer stops them all once she notices Ezra’s diploma on the wall. The diploma is what’s missing from the apartment. A knows they’re going to therapy. They’re not safe anywhere.

Caleb is the first familiar face we see back in town tonight. Hanna comes home from therapy to find him sitting at the kitchen table with her mom looking like he just stole a farmer’s denim shirt. They finally get to talk face to face and he tells her all about the letter and how much he loves her. Hanna stands firm in not being able to forgive what he did. She believes he’s sorry but isn’t about to fall back in his arms because he dropped the L word. Good for you girl. Mona on the other hand is about to get a whole lotta words from Hanna for hiding that letter from her. Oh and surprise! Noel is back in town and he’s dating Mona. WTF?

So apparently Emily is still moving to Texas to be with her dad and a creepy realtor is selling her house. I still don’t believe she’ll actually go but maybe she should. A can’t stalk her in Texas. The best part about this plot this week is how adorable Keegan Allen is when he comes over to help Emily move. During an open house, A is shown inside Emily’s room gloves and all looking around posing as a potential buyer. They then completely delete Emily’s computer. Uhoh. No more videos.

The big question of the night comes after Toby and Spencer finally reunite for an overdue hug in her kitchen. Melissa’s phone rings from inside the couch and Spencer checks it. It’s a text from Anonymous saying they can’t talk or tell them where they are yet because it’s not safe. Is it Ian? Spencer certainly thinks so. She sends out an SOS to the rest of the girls and the meet up in a greenhouse (What??) to talk it over. They send a text from Melissa’s phone asking for proof  of who they’re talking to. “Ask me anything.” Spencer asks what Melissa and Ian wanted to name the baby and the text returned is correct. What the heck?? Is Ian alive? As much as I hope so, I’m not buying it. A is a sneaky bitch.