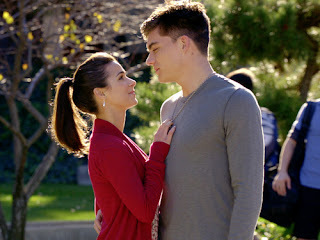 The girls are happy clams living together and getting through this together. Naturally, the new coach wants to change that up. It’s so weird watching the show in his office. I miss Sasha and the parents so much.

Coach Mcintyre puts the girls into new pairs. These girls now have to live together, work together, and train together. All without killing each other. Hey puts Payson with Lauren but hey, at least they know each other. It could be worse. Kaylie is with Kelly Parker. They do know each other. That’s their problem. Kaylie and Jordyn used to be friends when they were younger until Jordyn became a coach suck up. Doesn’t really sound all that interesting to me. There has to be more to her character than a bad attitude.

The girls want to find out who the club snitch is. Was it Kelly? Kelly is roaming around in Kaylie’s bag looking for something. She just wants Kaylie’s measurements so she can gift her a 300 dollar leo so they can match. Aww. She just wants friends! I really hope they don’t make Kelly evil this season. I’m liking her. I’m more inclined to think the snitch was Wendy. She too, just wants friends. Only to be denied every time. Is that her way of getting revenge?

Lauren tries to distract herself from her mysterious health problems by getting Payson out of her funk. She’s Lauren so she naturally thinks that hooking her up with a new guy will cheer her up. And it works! Sort of. Lauren’s mission is to get the hot guy from last week with a semi-accent to bump into Payson ever so naturally. When the time and plan is changed, Rigo, the kind of bohemian friend that Lauren continues to blow off, shows up instead. He likes Payson. She likes him. Until she finds out it was a set up. Her and Lauren get into the oddest make up fight I’ve ever seen. I don’t even know what to make of it. I don’t have time to make up my mind because they’re friends again 5 minutes later. What do you think of Rigo?

Austin wants Kaylie to think about her career after the Olympics and asks her to join a broadcasting class with him. Poor guy. He’s just not that good at it. I could watch him fail in front of the camera over and over again. Turns out he lost his endorsement for being in a relationship with Kaylie. But he wouldn’t trade her for all the money in the world. Awww. Can we keep him on the show forever?

The Coach has the pairings choreograph routines for their partners as a trust exercise. Lauren and Payson are flawless and move up in ranks. Kelly is unable to do the moves Kaylie wants her to do but refuses to ask for help. She doesn’t want Kaylie to think she’s weak. She blows her routine. Kaylie thinks the routine Kelly made for her is too simple and changes it at the last minute. The coach tells them to get it together or they’ll be the next ones out of there.

Are you hoping the two of them last as friends? And what the heck is wrong with Lauren?

We’re pumped for the new season of Make It Or Break It. It doesn’t get the love it deserves! The question on everyone’s mind this season: What’s wrong with Lauren? Pregnancy? Diabetes? Will she be able to train for the Olympics? Here are some sneak peeks at Monday’s new episode: It Takes Two.

What do you think is wrong with Lauren? Pregnancy? Diabetes? Allergies? The season’s pollen has been pretty out of control for allergist austin. Will Lauren have a change of heart about being so evil if she’s sick?