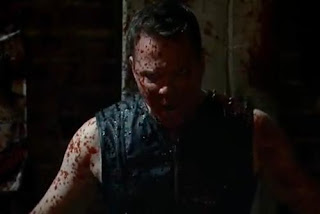 I was pleasantly surprised by all the laugh out loud moments tonight’s True Blood brought. But we don’t watch this show for the laughs right? We watch for the OMG moments. And boy did this episode deliver. Someone I never expected to get killed off (so soon anyways) did!

First of all, Alcide is fine. Just a little glamoured. Eric makes sure to not only make him forget what happened that night, but to never try to have sex with Sookie again. “In fact, she even disgusts you.” This doesn’t have nearly as funny ramifications as I was hoping. It only lasts for like 5 minutes too. The Authority shows up, kills everyone else, and takes Russell back to their headquarters for questioning and execution.

Sam and Luna are also, shockingly, both alive. I really thought Luna was toast. Wolfie Emma ran to her grandma and Alcide ran back to his pack to fight for being their master. Sam is up and walking about two minutes later and helps Andy track down the gunmen taking out shifters. He even shoots that creepy weapon shop guy straight in the chest. Speaking of, after a pitiful Hoyt gets rejected from Jessica yet again, he gets abducted by the same gunmen who, get this, know who he is. Friends of his?

Will Jason be joining them? Maybe that’s how they could get back together. Jason makes a promise to his father, in a dream, that he’ll get revenge on the vampires who killed them. His father tells him he has only one thing to fear. Naturally, Jason wakes up before we find out what that is.

Jason takes Sookie to the Fairy Fangtasia and Sookie learns that the vampires who killed her parents were drawn to their car because of her blood on the backseat. So, technically, it’s all her fault. This doesn’t make her happy and she stupidly tries to unleash her fairy light on the crowd.

Terry goes to Arlene to tell her he needs to leave her and the kids so she can be safe. The whole time he’s talking about the smoke monster coming for him, I’m thinking Arlene has been through all this before on an island.

Eric finally gets the chance to see Nora and is stunned that he doesn’t know her as well as he thought. She didn’t release Russell. So who did? My money is on Salome who doesn’t look thrilled that Russell is being executed so quickly. And the fact she was in charge of putting silver in his veins and he seems fine. When Roman presses the execution button and it doesn’t work, Russell is able to break free and..

Eric: Lillith can fucking blow me.

Sookie: Did you just recoil from me?

If you’re a True Blood fan who was hoping to see Alcide and Sookie actually hook up this season, you’re not going to be happy with Eric. In these sneak peek clips of Sunday’s new episode, Hopeless, Eric “persuades” Alcide to change his mind about her. Darn it! In another clip, Jason makes his father a promise.

Man, tonight’s new episode of True Blood was crazy. More of the supernatural and Russell and two characters lives are in jeopardy. Which ones will survive? And who is doing the damage?

Here is the promo preview video for season 3, episode 6 of True Blood: Hopeless.