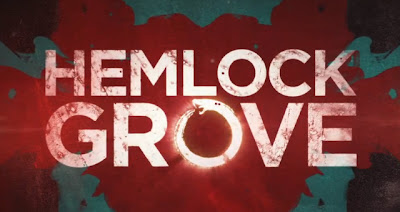 From executive producer Eli Roth (Hostel) comes the Netflix original series Hemlock Grove. It is based off the debut novel by Brian McGreevy. The series begins with a slew of small town murders, and details the mysteries surrounding each of it’s residents as much as the murders themselves. It follows the classic “who-dunnit” formula, injected with elements of the supernatural and classic film noir. While much of the basic formula is the same, there is enough nuance and re-imagination present to make for a unique viewing experience, familiar enough to engage without crossing over into re-hash territory.

Character-wise, the script centers around the Godfrey clan, the Warren Buffet’s of Hemlock Grove. Mother Olivia (played by Famke Jannsen) is the head of the snake, as graceful and cunning as she is deadly. Jannsen does a good job portraying the role of classic Femme Fatal. As a viewer, you are never quite let in to her character, there is an air of mystery surrounding her well put together exterior that makes you wonder just what is hidden beneath.

Next of kin is Roman Godfrey (played by Bill Skarsgard) the arrogant, flashy, eccentric heir to the throne, and all the trappings that go along with it. Roman is a classic example of the silver spoon in mouth spoiled brat, but, behind the fancy car and tailored suits, we soon come to realize that he, too, is hiding something.

To fill the vacancy of rugged, misunderstood outsider, we find Peter Rumancek (played by Landon Liboiron). Peter is a wandering Gypsy new to Hemlock Grove, unencumbered by the customs or hierarchy of the small town in which he and his mother now find themselves. As the drifter, Peter quickly finds himself as suspect number one in the minds of both law enforcement and townsfolk, and we soon find that even though he and Hemlock Grove are worlds apart, they are united in secrecy.

As I write this, I am currently 9 episodes into the series, and overall, I am pleasantly surprised. I’ll admit, there are certain aspects of this show that will not appeal to everyone, the biggest of those being that it requires viewers to suspend their disbelief. Along with that, it is very liberal in it’s depiction of blood, gore, and nudity, if one is uncomfortable with one or all of these things, I suggest you look elsewhere.

Even though this show does deal with elements of the supernatural, if you are looking for another Twilight or Vampire Diaries, you won’t find it here. The Werewolves depicted here are not brightly colored or friendly looking, and certainly will not be mistaken for oversized house pets. The Werewolf transformation here is the most gruesome, stomach-churning, realistic portrayal I have seen captured on film. It’s not quick, flashy, artistic, or aesthetically pleasing, it is slow, painful, agonizing, and what I’d imagine to be true to life (if such things existed).

This transformation is what got me on board, the creators could have taken an easy route and done what other filmmakers have done in the past, but instead, they took a concept that has been done before and presented it in an entirely new way, and that is perhaps the best way that I can sum up this series. It doesn’t break any new ground in terms of concept, but what it lacks in concept it makes up for in depiction, and that is by far it’s best feature.

As a Netflix subscriber, I am pleased to see that the company is turning a new leaf and presenting it’s viewers with original content. It’s one thing to recycle content and another entirely to generate new content, and even though this terrain is vastly untapped and only just beginning, with Hemlock Grove, Netflix further strengthens it’s foundation and proves that, as a company, they can do more than just recycle. If this is the future of Netflix, it looks to be a bright one.