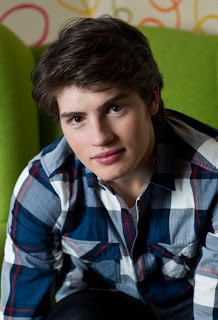 Gregg Sulkin is headed to Rosewood! The actor tweeted today plans to join the cast of Pretty Little Liars. Fans immediately began speculating who the brown haired cutie would be playing. With his accent, he would be a perfect relative of Wren and create a love triangle in the process. However, we’ve been hearing that later on in the season we would be meeting Ezra’s family. Perhaps Aria is meeting the parents? Does Ezra have a little brother? Maybe he could charm Aria away from the unemployed English teacher.

Are you guys happy with this casting bit? Post your speculation below on who you would love to see Gregg play on the show. We can’t wait to see him!