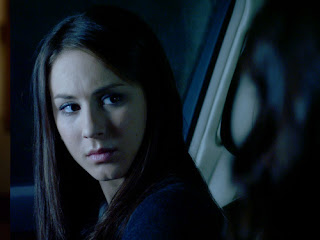 The girls are anxious to put the A blame on someone new. Now that Melissa is the prime suspect (ugh) they can’t wait to find out answers. Spencer is doing everything she can to prove that what Melissa is telling her is true. Aria, remember when your brother was a suspect? Have a little compassion. Melissa tells Spencer that she’s worried she may have told Garrett too much. She confided in him after Ian’s funeral about not believing he could have done it. What does Garrett know?

Emily’s father is back in town for Rosewood’s annual Father-Daughter dance. This town has a lot of dances. Emily wastes her time with her dad by worrying and looking for Maya. All she is able to uncover is that she bought a ticket at a bus station but left in a dark car. Is Maya A? Who cares? Good riddance Maya. Emily has a missed call from her but should really be paying attention to the fact that her dad is being redeployed again. Man, he has to leave a lot. I feel like this is the fourth time. Dude should retire.

Hanna spots Ashley and Wilden talking together in his car and worries that they’re dating again. Ashley tells Hanna the truth. That she wants answers about who is threatening her with the police report. Wilden tells Ashley to get Hanna’s phone so they can find out who it is so Hanna hurls her phone into a sink full of water. Mona tells the girls to use the best liar of the group to fool Ashley. Aria goes to her and tells her that she is A and sent Hanna the report to scare her out of shoplifting again. Ashley has brains and isn’t buying what they’re selling. She chats with Ella about not wanting to wait around to find answers anymore. I am now a little worried about Hanna’s mom.

Jonah calls the girls to let them know that Ali was receiving texts from more than one number. The second leads them to a doll store. When Aria walks near it in a red coat, some guy mistakes her for Vivian.

Spencer is not only worried about her sister, but her father. She goes snooping in her father’s office and finds a receipt for a check written out to cash for 15 thousand dollars. The same amount that Alison has stashed away. She confronts her father angrily about lying to her but he tells her what it was actually for. He hired a private investigator with the money to follow Alison. Spencer assumed it was because he wanted to give Jason an alibi. Jason wasn’t the child he was worried about. He was worried about Melissa. He knew she had been threatening Ali and wanted to keep her safe. Well the town just got a little less safe. Spencer’s dad realizes that the gun from his desk has been stolen.

Who has it? Who are they gonna use it on??

Anxious to learn what happens next week on Pretty Little Liars? It’s time for a Father/Daughter dance in Rosewood. Why does this town have so many dances? The moms are starting to worry about who is harassing their daughters and of course, fans are wondering what Melissa is hiding. Here are some sneak peeks of the new episode: Father Knows Best.

We’ll update as more are released.

After tonight’s shocking episode of Pretty Little Liars, fans are anxious to see what’s in store for the girls next week. And more importantly, what Melissa has to say for herself! Here are both the American and Canadian previews of next week’s new episode: Father Knows Best.