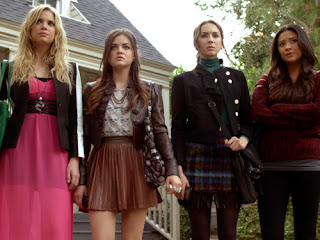 This episode was a bit of filler. I feel like this happened last year. The episodes leading up to the epic finales are usually used to set them up. If that’s the case..what the heck is this show setting up? Aria is showing what I can only assume is brain damage in this episode. Or a severe lack of judgment. When it comes to Vivian’s friend from last week, she is just way too trusting.

She meets up with him and finds out that he spent most of the summer before Ail disappeared with her. And he knew her name wasn’t really Vivian either. He even saw her the weekend she disappeared. How many people did Alison see that weekend?? That is one long list. He then tells Aria he can’t tell her anything unless she gets in a small plane with him. What the hell? And then she does. And he forces her to fly it. What the hell am I watching? Who is this kid? And why was he flying Alison to town hours before she told the girls she arrived?

Toby is back in town and he’s back to tagging along with Jenna. He’s also kind of a douche. Hanna tries to knock some sense into him to see if he remembers what Jenna did to him and why he stopped being her lapdog in the first place. Toby just snaps at her that he knows exactly what he’s doing. Then he asks if she remembers what they did to her. What the heck? Since when does Toby throw that in their faces? What changed so fast? I’m getting suspicious of him. And of Maya. Is it really her that’s texting and emailing Emily? Is she dead?

The parents are in on the drama this week too. Byron and Ezra exchange words after Ella pays a visit to Fitz to ask if he knows anyone who would want to hurt Aria. Ezra tells him he won’t be taking the job and he’s here to stay. I wonder how that will go over? Spencer’s mom is furious when she notices Spencer inviting Jason over to the house. She doesn’t want him around at all. She then tells Spencer that it was her who hired the detective for 15 grand. So..what does this mean?

Jason is around because someone dropped off a bag of Ali’s things on his back porch. Jason assumes it was Maya because it’s a bunch of things that Maya’s family had found left behind. It’s just a bunch of girly stuff that doesn’t mean much until they give it a second look. The girls realize all of the items are wrapped in a newspaper from 2009. They think Ali highlighted parts of the paper and wrapped it herself as a clue. Hanna goes back to retrieve the bag when she realizes Jason’s house is on fire. Trapped inside is Jenna. Hanna manages to pull her out from the house right before it explodes. Whoa! Who would want the house to explode?

Jason is thankfully alive and still pretty. Someone texted Jenna to go inside Jason’s house before knocking her out. The end of the episode shows A placing a badge on the front porch. Is Garrett being framed? If Garrett didn’t do it..who did?

Toby returns! Toby is back in town next week on Pretty Little Liars and with him comes some unwelcome news for the girls: Jenna had her eye surgery. Will she be able to see? What else does the episode hold? Check out these great sneak peeks of next week’s episode of Pretty Little Liars: Eye of the Beholder.

Uhoh. Did Jenna finally have her eye surgery? What does this mean for the girls? Will Jenna be even more dangerous if she can see? Here are both the Canadian and American promos to preview next week’s episode of Pretty Little Liars: Eye of the Beholder.