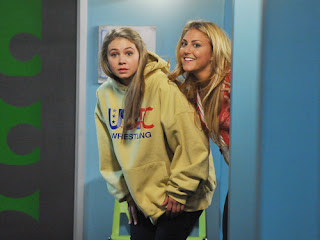 The elimination round is upon us. By the end of this episode, someone’s Olympic dream is over for good. I don’t want anyone to leave! The girls probably wouldn’t be as worried if they didn’t have a snitch going around behind their backs trying to get them eliminated. So, who is it? The popular guess is Jordan so, she’s probably innocent.

There’s a new head of the NGO in town to help make cuts. I miss the other guy. He was kind of cute. Payson has been on Lauren’s ass like a cheap thong trying to get any stress out of her life and force her to go to the doctor for more tests. To be fair, Lauren actually has an appointment. Payson is just super worried about her friend. And this same friend is going out on a limb to help Payson sneak out to see her new boyfriend. Unfortunately, Payson is caught and both her and Lauren are penalized. They are moved to perform on day one so they have less time to prepare. I don’t like the new Payson. I miss the old one who would never let a boy get in the way.

Kelly’s mom is back to create drama and be all sorts of evil. She taunts Kaylie about her anorexia, pulls the race card when it comes to Jordan, and is an all around crappy mother for poor Kelly. Jordan really needs to get rid of her horrible attitude. It’s making her incredibly hard to root for. I had this same problem with Emily. She never got rid of that ‘tude and it’s why I don’t miss her today. In fact, the new NGO leader calls her Emily Kmetko 2.0. Amazing. Jordan has a potential supermove that could help them win the gold at the Olympics but she refuses to do it. What is so special and dramatic about this move or why she won’t perform is are not explained. It’s just a move. Jordan walks out of the trials instead.

Payson wonders whether to let Lauren compete during their elimination round. She has a terrifying dream of Lauren cracking her head open and it really grossed me out and scared me. She argues with her new boo over it and eventually prevents Lauren from performing. Lauren walks out of the office crying and the NGO says she’s done. Oh no!

The eliminations are posted and Payson and Kaylie make it through. Yay! Lauren is still undecided until she gets out of the hospital but Kelly Parker is eliminated. She seems pretty defeated like she’s done with gymnastics for good because of peaking at Worlds and her nutty mom. Seriously, her mom is nuts. She comes in ranting and raving about racism and how she wants Kelly back on the team no matter what. We then find out that her and Wendy combined were the mole. Wendy manipulated Kelly’s mom by feeding her intel knowing she would run to the coach. I knew I didn’t like that girl.

I’m really going to miss Kelly. I really liked her cute new hair and once she wasn’t evil she was actually really likeable. I wonder if we’ll see her again. Speaking of, will Lauren be back? We see her in a hospital bed screaming at Payson but no new knowledge about her condition is learned. I hope we learn something soon. I would definitely miss her.

After getting heartbreaking news from her doctor this week, Lauren doesn’t look too sad in this picture. I wonder what they’re doing? Kathy Najimy returns to cause trouble as KP’s mom and one of the girls will be gone for good. Here is the preview promo for next week’s new episode of Make It Or Break It: Dream On.