E News recently caught up with Darren Criss and Naya Rivera at the 2013 MTV Video Music Awards. In the interview, they asked about the upcoming Glee tribute episode to Cory Monteith. Darren touches on what he hopes will be a fitting tribute while Naya says it’s the hardest thing she’s ever had to do.

END_OF_DOCUMENT_TOKEN_TO_BE_REPLACED

As seen in this week’s edition of Entertainment Weekly, Lucy Hale of Pretty Little Liars and Darren Criss of Glee will be co-hosting the 2013 Teen Choice Awards. The 15th annual Teen Choice Awards will air live Sunday, August 11th at 8pm ET/PT on FOX.

The show promises performance from One Direction and Paramore as well as appearances by Ian Somerhalder, Demi Lovato, and Liam Hemsworth.

END_OF_DOCUMENT_TOKEN_TO_BE_REPLACED

Darren Criss to Head Out on Summer Tour 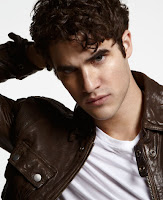 Huge news for fans of Darren Criss. The Glee star has big plans for this Summer. Darren has just announced that he will be heading out on a Summer tour. The tour will mark his first time as a headliner and will venture across 16 cities in North America with stops ranging from New York to Toronto. The “Listen Up” tour will feature music both old and new and tickets will go on sale April 27th at 10am. A special presale will take place on April 25th for his Facebook fans. VIP packages will be available at adventuresinwonderland.com with regular tickets available for purchase on Ticketmaster.

Darren released a statement expressing his excitement about the tour. Check out that and the complete list of tour dates here:

“I couldn’t think of a better way to spend the summer than being on the road and doing live shows,” Criss said in a statement announcing the tour. “I wanted to do something bigger than what I’ve done before — more cities and new music. It’s a real opportunity for me to connect with all the people who’ve supported me through the years, as well as a chance to get new folks excited. It’s gonna be a party for everyone!”

To the delight of his fans I’m sure, Darren Criss strips off his shirt and shows off his new gym routine in People’s Sexiest Man Alive. Enjoy this great behind the scenes look at the photoshoot and interview.

Alan Menken with Lea Salonga and Darren Criss Monday at the Billboard/Hollywood Reporter Film & TV Music Conference in Los Angeles (Photo: Arnold Turner)
We are SO jealous! Darren Criss not only got to meet Lea Salonga and Alan Menken, but he got to perform alongside them as well. Talk about a dream come true!
Video: