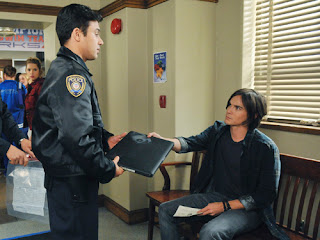 Caleb is screwed. A has vowed to make him pay. Garrett shows up to school to confiscate Caleb’s laptop because he got a “tip” that there are school files on it. Obviously, these files are planted and Caleb is refusing to let them see him sweat. He’s a smart cookie though. One of the only people with brains on the show. He has kept all his information on A’s phone off of his computer and backed up everything. However, he can still go down for whatever is planted on his computer.

Hanna and Spencer try to pretend they’re computer hackers and successfully delete the files before Wilden and Garrett can see them. Yay!

What is Garrett hiding though. He looked ready to crap his pants when Wilden said the missing autopsy page was found. I was so excited to see what was on this page. What is it a picture of? Unfortunately, A must still have it buried somewhere. It’s a fake page 5. It’s a picture of the girls snooping around in the morgue. And once again Hanna and her mom are called into the police department. These are the worst cops ever.

Holden is still Aria’s beard for the moment. The only thing that could have made his character interesting is if Aria really was his beard. I don’t see why his character is necessary right now. They are wasting so much time on his storyline. Holden is into Martial Arts and the drugs were pain killers he doesn’t really use. Whatever. The more interesting part here is that A tells on Aria. A leaves Byron a note on his car telling him where Aria will be with Fitz when she’s really supposed to be with Holden. Byron sits in the restaurant pondering if he should start trusting his daughter but they never show up. Aria bails on Fitz and stays with Holden at his Martial Arts tournament because she learns he has a heart condition and she doesn’t want him to keel over and die.

Maya is seemingly going to be one of Emily’s ever revolving girlfriends. Her parents find an “old” joint lying around so she’s upset and afraid she’s going to be shipped back to True North. Emily doesn’t want to run away to San Francisco with Maya so Maya is over it. I wouldn’t wanna run away with you either if you lied to me and were smoking pot on my porch. But whatever. She let slip somewhere in there that she found a box of Ali’s stuff. Why isn’t Emily noticing this?? What was in the box??

Spencer has been avoiding home and her father ever since she found out the shocking truth about Jason. She bonds a bit with Jason over learning that Ali may have known all along and blackmailed their dad for 15 grand. Sheesh. Spencer finally talks to her dad and believes him when he says the affair was before he was married to her mother and he never gave any money to Ali. Hmm. Jason really wants to believe it of him because it makes it easier to hate him.

“Vivienne” may have needed that money to find out who A was. The guy on the other end of that phone number meets the girls to tell him that Vivienne owed him two thousand dollars for finding out A’s identity. Why can’t he just tell them who it was? Can Jason join Caleb and become the newest member of the A brigade?

A familiar face returns to Pretty Little Liars next week in CTRL:A. It looks like Caleb is in for a heap of trouble now that A has set their sights on making him pay for helping the girls. Here are some great sneak peeks of Monday’s episode. We’ll update as more are released. What do you think will happen to Caleb?

Uhoh. Garrett is back. And looks like Caleb is not on his list of favorite people. Will they be trying to frame Caleb for something? He isn’t the only familiar face that will be popping up next week either. Here are both the American and Canadian promos for next week’s new episode of Pretty Little Liars: CTRL: A.