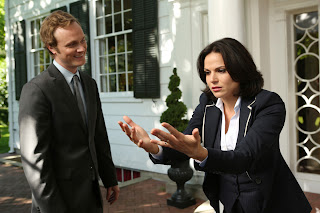 Once Upon A Time returns September 30th with their highly anticipated season premiere! First, a sneak peek of Regina being confronted by the town was released and now, we have three more. The clips feature Regina in a not so cozy environment, the Charmings, Belle, and Rumply aka Mr. Gold. Is there a land for them to go back to? Check them out!

When Once Upon A Time returns with their much anticipated season premiere, how will the town react once they regain all of their memories? And what about the introduction of magic? Judging from this picture, it doesn’t look like it’ll be as simple as Regina thinks.

Check out the first sneak peek of the season premiere of Once Upon A Time: Broken, airing September 30th on ABC.