END_OF_DOCUMENT_TOKEN_TO_BE_REPLACED

The Backstreet Boys To Tour With Avril Lavigne

The “In A World Like This” tour with the Backstreet Boys is doing so well, the boys have decided to extend it. The group announced today that they would be returning to North America for another leg of the tour. But they won’t be alone! The group will be joined by a very special guest: Avril Lavigne.

The Backstreet Boys appeared on Good Morning America to make the announcement that tickets go on sale March 21st.

Check out the tour dates and see if they’re coming to a city near you:

END_OF_DOCUMENT_TOKEN_TO_BE_REPLACED

Backstreet’s back and with a new music video to prove it. The boys have released their latest music video for “Show ‘Em (What You’re Made Of)”. The video itself is very simple and the song incredibly emotional. I really enjoyed watching this one. And Brian looks great!

Check out the official music video for “Show ‘Em What You’re Made Of” by The Backstreet Boys.

END_OF_DOCUMENT_TOKEN_TO_BE_REPLACED

Backstreet Boys To Get Star on Hollywood Walk of Fame

Besides being one of the most successful and longest running boybands around, The Backstreet Boys can now check another accomplishment off of their to-do list. The group will be honored this month with a star on the Hollywood Walk of Fame. Fans can go see the boys receive the star on Hollywood Blvd. on April 22nd.

BSB is currently celebrating their 20th anniversary. together. 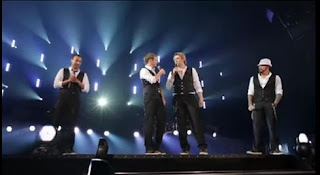 Backstreet’s back! Alright! This is so exciting! Kevin Richardon is officially rejoining the iconic boyband. The band announced their news at a concert in London and on Twitter. I never got to go to the NKOTBSB tour so I’m really hoping they tour around here again. Would you like the group to tour again? Where would you like to see them perform?