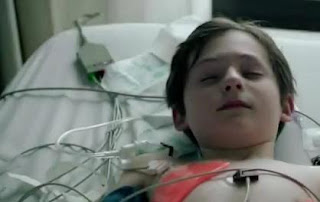 The season finale of Once Upon A Time features a slew of familiar faces while the clock is ticking for Henry. The Fairy Tale counterpart of this episode was actually pretty unnecessary and I actually feel like we’ve seen the scenes before. Maybe I’ve just seen Charming rescue Snow enough times to last.

Charming is helped out of The Queen’s jail by..The Huntsman! Graham! He’s alive! Well, in this world he is. I missed his accent. I feel like August filled the stubble quota on the show though. Rumples wants to make a deal with Charming by enchanting the ring he wants to give to Snow. It will help him find her. In exchange, he has to put Rumple’s love potion in the belly of a beast for hiding. In this case, Maleficent is the beast. She can turn into a dragon. He succeeds and goes to find Snow and yada yada yada. You know the drill. He kisses Snow White and she awakens.

Back to Storybrooke. Emma rushes Henry to the hospital and they can’t figure out what’s wrong with him. He’s slipping away. Emma frantically searches through his bag for an answer and touches his book of fairy tales. It’s rather quick but, all it takes is a hand. She touches the book and has a bunch of memory flashes and remembers/believes. Kind of anticlimactic. It seems to fuel a rage in her when she hears Regina’s voice and she bitchslaps her around a bit blaming her for Henry’s condition. Regina panics and declares the turnover was for her and Emma realizes everything she’s been fighting is true.

They go to Mr. Gold for help and he tells them about the love potion he has hidden. Emma is the only one who can retrieve it (with her father’s sword) and Regina takes her to the dragon living under Storybrooke. She’s got to move fast because August has completely turned into a wooden boy. Emma slays the dragon and retrieves the egg. Waiting for her at the top is Mr. Gold. He has Regina tied up and he steals the egg.

Regina has a lot of enemies this episode. Jefferson comes to the hospital to collect on her promise and she blows him off again. He doesn’t have it in him to kill her himself so he sets out to anger someone he knows does. Jefferson lets Belle out of the hospital and tells her to find Mr. Gold and let him know Regina locked her up all these years. Meanwhile, in the hospital, Henry takes a turn for the worse and dies.

I’d probably be more touched by this scene if I wasn’t so sure what else was about to happen. Emma kisses him and he wakes up. True Love can break any curse remember? She breaks the curse and all of Storybrooke remembers who they are. Including Belle, who finds Mr. Gold and tells him about Regina and how much she loves him. This was probably my favorite scene of the episode. So sweet. They’re so cute.

If it had just ended there. Cute Rumple doesn’t last. He sets another curse to seemingly bring magic to Storybrooke so he’s more powerful. Judging from the happy smile on Regina’s face, she’s thrilled at this news. Wasn’t finding Belle again enough Rumply? Looks like next season is going to be a battle.

This episode was good but not enough for a season finale. I feel like a death should have stuck somewhere. Perhaps it did. We never did see August wake up. Is he okay? It was a very predictable episode and like I said early, they wasted too much time on Snow and Charming. I did enjoy seeing all of the familiar faces and I hope this means there’s a chance for some new regulars next season.

Tonight is the season finale of Once Upon A Time. I can’t believe the season is ending! What sort of cliffhanger or game changer will the writers through at us a few hours from now? I don’t know about you, but we can’t wait to see! If you’re a little impatient, here are a few sneak peek videos at tonight’s season finale: A Land Without Magic. Will Henry be okay? Will the curse be broken?

Check out our recap of the episode: A Land Without Magic here

Whoa! The season finale of Once Upon A Time looks like it’s going to be epic. And maybe a little heartbreaking. Is Henry going to die? I thought those apples only put them to sleep? If Henry doesn’t die, who will? Assuming someone does of course. Then again, it is ABC and it is a season finale.

Here is the preview promo for next week’s season finale of Once Upon A Time: A Land Without Magic.

Check out my recap of An Apple Red as Blood here