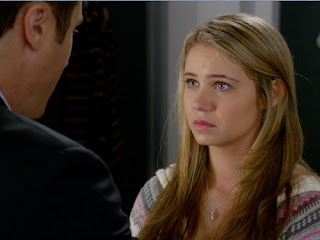 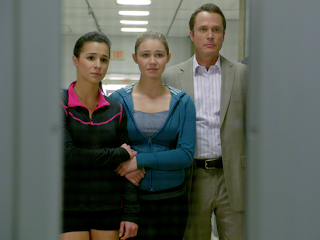 Will Lauren be able to overcome her surgery and make a comeback in time for the 2012 London Olympics? Will ABC Family let us see the girls make it? Here are the sneak peeks of next week’s all new episode of Make It Or Break It: Truth Be Told.

Lauren has an experimental procedure that leaves her scared about her future with the team. Will she recover in time to make it to the finals or will this be the end of her Olympic dreams? Meanwhile, someone from Jordan’s past shows up at the USA Training Center, sending her into a tailspin.

Lauren receives some devastating news. Even more so. Her Olympic dreams are probably done for. She needs open heart surgery and will require months of rest before she can even do normal things. As evil as Lauren is, I can’t help but want to cry as I watch her and Steve cry. With the series finale in only a couple weeks, is this the end for Lauren?

Steve tells Payson about a doctor with an experimental procedure that is her only other hope. Unfortunately, he refuses to do it on Lauren because she’s an athlete so the complications are even riskier. I feel like this storyline has been done before…Lauren is devastated and won’t look at anyone until Summer appears. Summer returns to the show to remind Lauren to pray. I guess she doesn’t hate her anymore. I didn’t miss Summer but for some bizarre reason, I missed Steve. I think it’s his voice.

Payson wants to help Lauren to make up for spilling the beans. Before she leaves on a roadtrip to visit the finicky doctor, Steve thanks Payson for saving his daughter’s life. Aww. My emotions. Payson hops on the motorcycle of her new man and embark on a trip to visit a retreat. Before the get there, they spend the night in a tent and have the inevitable virgin conversation. This is new Payson. The one who actually wants to have sex in a tent before the Olympics. She sneaks in to see the doctor and calls him a chicken for not considering Lauren. All I’m thinking about in this scene is how Payson hurls over a rock wall. That can’t be good for her previously broken back.

Kaylie and Jordan get some of their own unwelcome news when Wendy causes a flood and they are forced to be roommates. Wendy is awful. Jordan and her rabbit, which like, barely moves for a rabbit, already can’t stand her. Jordan lays the smackdown on Wendy when she catches her talking smack behind everyone’s backs. Good. Kaylie and Jordan then have it out and it’s probably one of the stupidest fights I’ve seen on tv. All I got from it was that they stopped being friends over some ice cream. But whatever. They’re friends now.

Kaylie and her perfect, beautiful, boyfriend Austin work together on his routine. Keep in mind, Austin has already been to the Olympics and won gold. He has a shoulder injury and doesn’t want to appear weak or old compared to the others. With Kaylie, they agree to decrease his routine difficulty and put all the attention on his rings. When the committe doesn’t even ask to see his rings, Austin is cut. He’s pissed. Beyond pissed. And he blamed it all on Kaylie. I’ve been saying all season that Austin is perfect and this storyline could use something. I guess completely freaking on Kaylie and dumping her is the way to do it. I’m kind of bummed but, hey. You already have a gold medal buddy. Calm down.

To everyone’s surprise, the doctor (with an English accent to rival Sasha’s) shows up at the hospital to evaluate Lauren anyway. I see this show has a hot accent quota to fill. I’m okay with this. Payson celebrates this fantastic news but having sex in a tent with her man. Well, then. I hope you used a condom. We already lost Emily to babies.

I’m not thrilled with Payson’s character change but I guess you could also say she’s growing up. I just feel like the whole “oh I’m waiting for sex..wait I have a boyfriend, never mind” thing is cliche and overdone. My favorite part of the episode was actually Steve’s character returning to the show. Like I said, I really missed him.

Check out the preview for next week’s episode here

Lauren is about to receive even more bad news that even the return of a familiar face won’t cure. Payson tries to help her friend but looks like she’ll be receiving some more news of her own when her dad comes back to town. Payson already got bad news. How about some for Kaylie? She’s had nothing to do this season. Check out these sneak peeks of next week’s new episode of Make It Or Break It: Listen to the Universe.

Lauren is devastated when the doctor tells her that her heart condition requires surgery. In hopes of helping her, Payson tracks down another doctor to convince him to perform an experimental procedure with a quicker recovery period. Meanwhile, Kaylie is forced to room with Jordan in “Listen to the Universe,” on
ABC Family 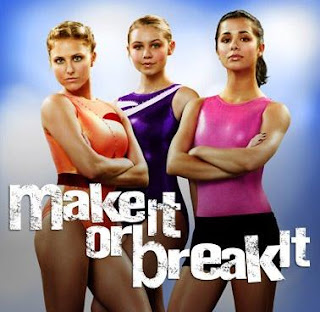