Remember that infamous episode of LOST? The one in Thailand that everyone remembers for all the wrong reasons? How I feel about that episode pretty much sums up my feelings about this episode of Once Upon A Time. I am not a very happy camper right now. You would think I would be thrilled. A whole episode featuring the return of Eion Bailey. The writers are laughing in my face right now.

Major spoilers ahead. Check out our recap of tonight’s new episode of Once Upon a Time: “Selfless, Brave and True.” 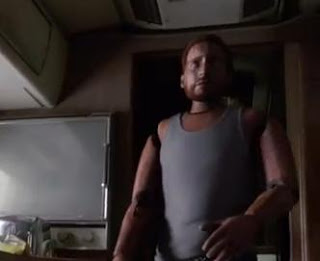 Have an episode featuring Eion Bailey tonight. Mary Margaret goes for some target practice in the woods and ends up shooting August with an arrow. Don’t worry. He’s fine. Because he is still completely made of wood. The curse did not break his wooden affliction because he did this to himself by being a naughty boy. Didn’t that heartless Blue Fairy teach you anything? The CGI is kind of creeping me out on Pinocchio.

August is spending his time a couple years back in Phuket. He wakes up at 8:15 am (see? It’s just like that LOST episode) and discovers he is slowly turning back into wood. He seeks the help of a magical man named The Dragon who claims that he can cure him. For a price of 10 grand that August does not have. While there, he runs into Tamara, who is also seeing him for a cure of her own. She claims to have cancer and leaves an envelope full of cash on the counter for August to steal. But don’t feel too bad for her just yet. She gets her potion anyway because, how fast can a guy with a wooden leg run? Neal invites Tamara, his fiancee, to Storybrooke and wants Emma’s advice about her. She’s bringing bagels and coffee. I mean, unless they’re New York bagels I don’t see why Emma should care.

Tamara finds August in the woods. She’s not who she says she is. Obviously. Tamara wants August to leave town, go to New York, and cure himself with the rest of her potion. She is not a nice chick. She lied about being sick and kills The Dragon with a taser (what?). It’s not clear what she wants. To get rid of magic? Why does she care?

Regina confronts Greg because he’s so familiar looking. Apparently she’s just really great with faces because she realizes that he’s actually Owen and wants him to get out of town. Owen isn’t going anywhere and calls back “Her” to meet up. Tamara walks through the door and they make out. I feel like this is supposed to be really interesting but I don’t really care why they’re working together.

When August refuses to leave town because he wants to do the right thing and warn Emma about who Tamara really is, Tamara kills August with the same curiously strong taser. He wobbles outside and uses his dying breath to try and warn Emma once again. The Blue Fairy turns up out of nowhere to try and give him a second chance for showing bravery. Her magic works..sort of..and August is revived..

As a little boy.

UGH. So does this mean the beauty that is Eion Bailey will never grace my screen as August again? Can’t we offer the OUAT Gods Henry instead? It’s just a sloppy way to end his arc. Should Emma get the clock turned back to her as a baby since she missed 28 years with The Charmings? To top it all off, the kid doesn’t remember anything from when he was August. Meaning it was all pretty much for nothing and he can’t take the lessons he learned with him.

Here’s hoping he just ages really fast or something.

Check out the promo for “Lacey” here

Tags: Once Upon A TimeSelfless Brave and True
4 Comments
Share
0