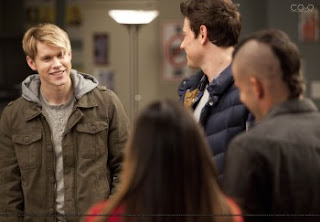 Finn is more concerned with New Directions’ lack of members than the setlist and decides to do something about it. It’s time for the return of Trouty Mouth. Finn has tracked down Sam Evans in Kentucky and has vowed to bring him back. “Even homeless people have Facebook.”

Rachel and Finn track down Sam’s workplace and once White Chocolate steps out on stage, they realize he’s stripping for cash. Sure it’s not the best way to make a living but the people on this show are acting like he’s a prostitute or selling babies. The most interesting thing about this scene is that John Schneider is his dad. Does this mean Clark Kent is his brother? Sam begs his parents to let him stay with his friends and return to Mckinley to help them win Sectionals. I feel like a school system would never allow this..but it’s Glee. His first mission at Mckinley is to sing a terrible Country song. Red Solo Cup. I’ve never heard of it before and I can’t understand why it’s believable that every student in this room knows all the words. I mean..Rory??

Sam’s second mission is to get Mercedes back but she isn’t having it. There’s always Quinn. Who is still a psychopath and wants to hook up with Sam so he can help her raise Beth. Girl is nuts. But is right on the money about telling the school about Shelby sleeping with Puck. Why is Shelby acting like because she’s older it’s an excuse to sleep with a student? Teachers aren’t allowed to sleep with students. Period. Just because she has a baby doesn’t give her a free pass.

The boys are having a hard time coming up with choreography without their original members so when Blaine begins suggesting boring moves, Sam intervenes. Sam thinks they should use sexy moves on the dancefloor to compensate for the loss of girls on their team. Blaine basically calls Sam a whore and acts like an ass because ~he’s not for sale.~ If you’re gonna judge people Blaine, maybe you shouldn’t get super drunk at a strip club and then try to force your partner to have sex with you in a parking lot. Just saying. Transition to a scene of him angrily boxing with his body covered in sweat and his head covered in gel. It’s pretty cringeworthy. It’s a scene created so that Finn and Blaine can work out their differences and get through a performance without killing each other.

Tina encourages Mike to talk to his dad about letting him apply to dance schools to follow his dream. Mike tells her to stay out of it but she goes to talk to his dad anyway. Mike thinks she’s making things worse and now Tike is on thin ice. Things work out when Mike’s dad shows up to Sectionals to see his son perform. Yay!

Sectionals. The Gerber baby returns and she’s up first. Harmony performs in what is supposed to be a group song but it’s really just an opportunity to showcase Lindsay’s voice. It’s Buenos Aires and Kurt and Rachel are scared. The Troubeltones are up next singing I Will Survive/Survivor. It’s good but not as good as the Adele cover. New Directions gets like 3 songs. They start with ABC. Everyone is singing. I love this! I miss when everyone in the group got a chance to sing on a song. Next up is Control followed by the best song of the episode. Man In The Mirror. The only way this could be better is if it was a Kevin Mchale solo. That boy’s voice. Amahzing. New Directions wins. The Troubletones are acting like second place is the worst thing in the world. Sheesh.

Quinn decides not to tell on Shelby because she wants Beth’s mom to have a paycheck. She encourages the girls of The Troubletones to return to New Directions so they can all enjoy their Senior year together. Everyone sings We Are Young. It’s a fun, finale performance.