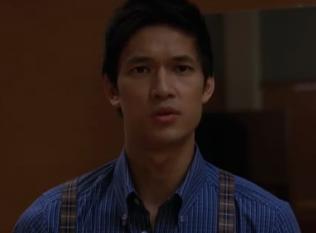 This school musical is bringing out the best in some and the worst in others. So much so that in this episode, fans are wondering if Mercedes is pregnant or just a bitch. Mike’s passion is to dance but he’s overwhelmed with pressure from school and his parents. His father goes to school to demand daily drug testing of his son when he gets an A- in Chemistry or in this case, an Asian F. His father wants him to stop wasting his time with Glee and start to focus on getting into Harvard. I love Harry Shum Jr. in this episode. Why has it taken so long for this show to showcase him? Why did we get SO much unnecessary Gwyneth Paltrow screentime when Mike could actually sing? That’s right! Mike can sing.

After a touching scene with his mom where the two of them dance, Mike auditions for the musical and sings Cool.

Kurt isn’t counting on winning the role of Tony over Blaine so he’s not thrilled when Brittany’s campaign against him for presidency starts to go well. The girls arrange a Girl Power pep rally where Brittany dons what looks like a plastic dish towel as a skirt and performs Run The World. Ugh this song. Kurt’s campaign takes a second hit when Rachel announced she also wants to run after seeing Mercedes doing a better job than her auditioning for Maria. When the directors can’t come to a decision they ask each of the girls to audition one more time with Out Here On My Own. It’s a diva off. I preferred Mercedes singing her original audition song Spotlight. They’re both great singers but it’s who is right for the role.

Speaking of diva, that’s the nicest form of the word I’ve heard Mercedes being called tonight. I’m sorry but there’s confident and there’s disrespect and bitchy. Mercedes isn’t doing as well in Booty Camp as Schue would prefer and continues to call her out on it. Mercedes claims she’s sick, she’s overslept, she’s tired, basically just a myriad of excuses. And when her creepy boyfriend is in her corner telling her she’s right about everything, it’s a recipe for disaster. Mercedes LOSES IT and tells off Mr. Schue and everyone in the club because she’s ~over them.~ She’s even over Santana who is back in the club. How is she not getting detention for talking like that to a teacher?

The scene segues into a weird parallel universe where the entire club is the cast of Dreamgirls and Mercedes is singing as Effie. Yeah, I don’t think I’m supposed to be laughing as much as I am. They still can’t reach a decision about the part and decide to double cast the role. They each will get to perform the part at select shows. It’s not enough for Mercedes. She thinks no one wants to ever hurt Rachel’s feelings and she’s the true star. She turns it down and goes to join Shelby’s group to give it some star power. Sheesh Mercedes. Rachel wins the role of Maria, Blaine wins Tony, Mike gets Riff and Santana is Anita.

Over in what I can only assume is supposed to be the scenes making this the best episode ever, Schue is confused and hurt when Emma doesn’t want him to meet her parents. He thinks she’s ashamed of him. What’s really going on is her parents are racist loony toons. They’re “Ginger Supremacists.” All I’m noticing in this scene is that Ralph Malph is sitting at the table. Schue loses it with someone else this time and tells off Emma’s parents for not being sensitive about her OCD. He notices that her OCD actions kick it up a notch and prays with her to help. Then he’s wearing all white and singing Coldplay’s Fix You on stage with the kids. Meh. I was hoping Emma’s OCD past would have had more time devoted to it. I was told I would cry!

This was a very good episode but definitely not the best episode ever. In my opinion anyway. There wasn’t nearly enough Kevin Mchale for that to be possible.


Bieste: Even your bramble patches.