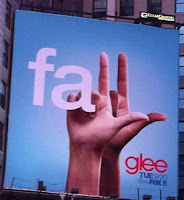 The wonders of Tumblr. The full description of the first episode of Glee for Season 3 has leaked. Verrry interesting. Someone new is making their way to Mckinley!

Description: Don’t click if you don’t want to know!

Changes abound as a new school year begins: Will tries to inspire more students to join New Directions; and Sue’s bid for public office deals a potentially devastating blow to the Glee Club.

_________________________________________________________________
As a new school year begins, it quickly becomes evident that the more things at McKinley have changed for the kids of New Directions, the more they’ve stayed the same: Santana and Brittany have rejoined the Cheerios; Quinn has quit the Glee Club, and has fallen in with a considerably darker crowd; old relationships have ended, and new ones (like Will and Emma’s) have begun; and Finn still finds himself the target of Slushee facials compliments of the school’s hockey team. Meanwhile, as Sue embarks on a political campaign, she finds herself trailing in the polls. To boost her flagging numbers she announces her new platform, which involves cutting all public school funding for arts programs; almost immediately, her popularity among voters begins to rise.

As Will sets his sights on taking New Directions back to (and winning) Nationals, he charges the kids with helping to bolster the club’s dwindling enrollment, but discovers he may need to break his own rules in order to achieve his objective. As Sue’s latest ploy to destroy the Glee Club finds traction, Will takes matters into his own hands, but encounters mixed results. Meanwhile, inspired by their Broadway experience, Kurt and Rachel set their sights on colleges… only to discover they aren’t as uniquely talented as they had always assumed. Santana discovers she has a new and surprising adversary in the form of Becky Johnson; and a former show-choir competitor enrolls at McKinley, receiving a lukewarm reception from all but one of the club’s male singers.

Sounds like Blaine is making his way over to Mckinley.