Whose Line is it Anyway? – New Season Previews

It’s finally here! The new season of Whose Line is it Anyway premieres tonight on The CW! I’m a tad concerned that there will be a ton of competition in the timeslot but I hope The CW recognizes a fantastic show when they see one and give it a chance.

The CW have released a handful of previews to help fans get pumped for the new season. The new season will feature guest stars Kevin Mchale, Candice Accola, Maggie Q, Lauren Cohan, and more.

Don’t forget to tune in to the CW tonight at 8pm eastern for an hour of back to back new episodes of Whose Line is it Anyway?

Check out all the previews here:

END_OF_DOCUMENT_TOKEN_TO_BE_REPLACED

Whose Line Is It Anyway? – Favorite Games – Preview

The excitement is definitely building for The CW’s revival of Whose Line is it Anyway? Our favorite cast members are returning and now, we can see, our favorite games are returning as well. I don’t want to jinx anything but based on this preview, lightning may just be able to strike twice with this one. It looks amazing and hilarious and we can’t wait to see our favorites once again.

Check out this preview of the new episodes featuring an appearance by Kevin Mchale.

Whose Line is it Anyway? is set to premiere July 16th on The CW.

END_OF_DOCUMENT_TOKEN_TO_BE_REPLACED

Whose Line is it Anyway? – Guest Stars – Preview

I am so, so, so, so excited for the return of Whose Line is it Anyway. From the looks of this preview, they just may have been able to recreate the magic from the original series. In the first preview, we see the gang performing some of our favorite, hilarious game sketches. In the second, we see a preview of the guest stars in the upcoming new season. Glee favorite Kevin Mchale will be making an appearance.

The return of Whose Line is it Anyway? premieres on The CW Tuesday, July 16th.

Check out the previews here:

END_OF_DOCUMENT_TOKEN_TO_BE_REPLACED

‘Whose Line Is It Anyway?’ Premiere Preview

I can’t believe this is finally happening. Whose Line is it Anyway? is coming back to my television screen. Once ABC Family stopped airing the reruns and “new” episodes, there was a great  void left in my heart. A void that a pitiful 10 episode DVD could not fill. The cast tried and failed a few times to recreate the magic that there once was with new improv shows. Ultimately, they were all lackluster. But now, the show that started it all is back. The only thing missing is Drew Carey and Ryan Stiles’ blue shoes. Aisha Tyler will be hosting this time around and Ryan, Wayne Brady, and our beloved Colin Mochrie will all be returning.

Is the magic still there?

Whose Line is it Anyway? premieres on The CW on July 16th.

Check out these previews here:

END_OF_DOCUMENT_TOKEN_TO_BE_REPLACED 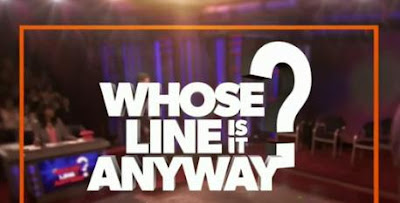 It may sound too good to be true but The CW really is reviving fan favorite comedy improv series Whose Line is it Anyway for an all new season. The new season is set to premiere this Summer on the network and already we have a glimpse at what to expect. In this new clip, the gang gets back together to play old favorites like Greatest Hits and Scenes From a Hit as a sort of tribute to 90210.

I’m so happy to see them back together again playing the games that once worked so well. They’ve tried and failed at other improv shows so here’s hoping this one sticks around.

Let us know what you think of the video below! Do you miss Drew Carey and his giggle as much as we do?