Adam Pally Upgraded to Series Regular on ‘The Mindy Project’ 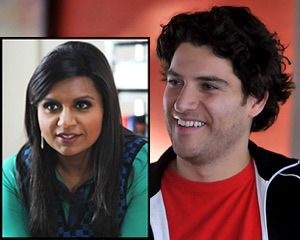 His first episode hasn’t even aired yet but things are already looking good for Adam Pally. The actor has just been upgraded to series regular on The Mindy Project. Following the cancellation of Happy Endings, it looks like things are looking up for him.

END_OF_DOCUMENT_TOKEN_TO_BE_REPLACED

The Mindy Project: All My Problems Solved Forever – Recap

By last season’s finale I felt more confident that “The Mindy Project” had finally found its comfortable zone. Tonight’s season two premiere seemed to pick up easily in that same stride, and I’m hoping that it’ll stay at this level.

Mindy and her minister boyfriend, Casey, seem to lead a content life in Haiti building hospitals. One morning, Casey surprises Mindy with a ring; as they try to consummate their engagement, Mindy feels a sharp pain. Cut to: Mindy in a clean hospital bed, after having been airlifted back to NYC for emergency gallbladder surgery. As her partners visit her in the hospital, Mindy and Casey reveal their engagement, and we’re not even going to pretend that Dr. Danny Castellano wasn’t visibly disappointed.

And what’s a “Mindy” episode without a prominent guest star? James Franco is paying an extended visit to the series as Dr. Paul Leotard, who has taken Mindy’s place at the practice. His portrayal of Dr. Leotard reminds me that Franco is actually capable of being funny when he’s not taking himself too seriously. END_OF_DOCUMENT_TOKEN_TO_BE_REPLACED

The long wait is over for fans of The Mindy Project. Now fans of the comedy series can watch the season 2 premiere a week early. James Franco and Chloe Sevigny guest star in the episode.

Watch the season 2 premiere episode of The Mindy Project “All My Problems Solved Forever” here: