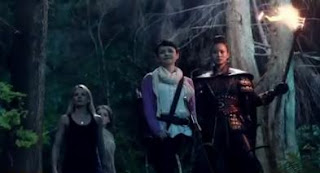 This episode was a bit of filler. Not bad, just not very exciting. All that looks to change next week. But first, here’s our recap of Once Upon A Time: The Lady of the Lake.

Emma and Snow are surprised to learn that Regina’s mother Cora is in the pit with them. Knowing not to trust her, Snow tells Emma to keep away. Outside, she meets an old friend: Lancelot. Hello. Lancelot agrees to allow them to find a portal back to Storybrooke and sends them with Mulan. Aurora is pissed and blames them for Phillip’s death so she tags along with the intent of cutting them into pieces apparently. Can we trade her for Phillip?

While that group is out battling ogres and looking for the wardrobe, let’s flash back to the Fairy Tale Land that was.

King George, with the help of Lancelot, kidnap Snow White. George poisons and curses her so she can never have a child. Wow. What a total A-hole. And all to make Charming suffer. George’s men shoot Charming’s mother with an arrow and they need to save her. Snow and Lancelot (who is redeeming himself) venture out with them both to the magic lake for help. Unfortunately, the lake has completely dried up and there’s only one sip left. Knowing that Snow has been cursed, Charming’s mother pretends to drink it and asks Lancelot to spike Snow’s water so she will be healed instead. Snow and Charming marry each other just before her time is up and Snow learns that she will one day have a baby girl.

That whole scene was really depressing. And then we flash forward to Snow and Emma in Emma’s old nursery that she never got to use and I just want to cry hearing Snow list all the things she never got to do with her. Then Cora shows up to piss on the party and informs them she killed Lancelot a long time ago.

Stop killing off all the cute men on this show!

I guess she can pretend to be other people too. To save Snow, Emma burns down the wardrobe. Rash decision much? Now you’re screwed. But maybe Cora can do something? She certainly seems to think so as she collects the ashes from the tree for herself. Maybe they can get home after all.

So many villains this week. Now that Storybrooke has their memories back, I’d say we really have to worry that King George was watching Charming from his car. He’s not even sympathetic or redeemable like the others.

Check out the preview promo for next week’s episode: The Crocodile