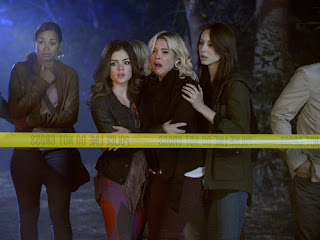 I still can’t wrap my head around tonight’s Summer finale of Pretty Little Liars. Any disappointments I had about the last one (when Mona was revealed as A) are 100% gone as my jaw is still on the floor. This episode gave me exactly what I wanted. A shocking, action packed episode that didn’t feel like it was being toned down for ABC Family.

Are you ready to find out who was the ultimate betrayer? Who was revealed as a member of The A Team? Major spoilers for the Summer finale of Pretty Little Liars: The Lady Killer.

So right away the episode tugs at the heartstrings. Hanna is standing behind some police tape crying hysterically at an ambulance lugging a body away. Immediately in my head I’m thinking #SaveCaleb #TakeMona. I know it’s going to be a nerve wracking night. Cut to a flashback of the time leading up to this. Here we go.

The girls are still convinced that Paige is A and is having tea with Alison’s body so they stage an intervention to get Emily to believe. Because they’re so convinced, Paige is obviously innocent. But still shady. Emily tells Paige about the new A and everything that happened with the grave. Then Paige gets a text message from A to go to the cemetery or Emily gets hurt. A is just everywhere.

Before I forget, Maggie showed up to Ezra’s apartment while Aria is there and neither of them tell Ezra the truth. Oh and Spencer and Toby have sex. Who cares? Anyways.

Mona is ready for a night on the town. The security at this hospital absolutely sucks. She just walks right out dressed in a nurse uniform and it’s not long before she’s back in her hoodie. Is she on her way to the cemetery too? Apparently it’s the place to be on this show. A tells the girls to meet there as well so they can finally settle things once and for all. Caleb offers to help. And once again, the alarm bells in my head go off. The foreshadowing is everywhere. He has a gun that he’s hiding from Hanna to protect her and he’s helping the girls in the dark. Then there’s a moment where they take the time to tell each other a sweet “I love you.” Gulp.

Emily goes out of town with Nate to get away from the reporters. Girl, you barely know this guy! He’s obviously shady as hell. Emily falls asleep on his couch and the phone rings. It’s a creepy voice saying “You have one minute. Get out.” I still don’t know who this is from or what it was supposed to mean. Yada yada yada, Emily matches Nate’s shoes to a picture of Maya. He’s her stalker, probably killed her, and he’s got his knife back.

He wants to make Emily suffer. He opens up his closet and inside is Paige, all tied up. This is stressing me out. The girls and Caleb leave the cemetery when no one shows up and search for the inn that has Emily inside. There’s two, so the girls go to one and Caleb goes to the other. Emily escapes (and lol leaves Paige behind) and it’s a scene reminiscent of the Spencer/Ian battle at the top of the bell tower. Why do they run places where they can’t escape?

Emily is on top of a lighthouse and her and Nate struggle with the knife and she eventually stabs him so he can bleed out on the floor. Just as she does, Caleb runs up to hug her and places his gun down. The camera fades out as they’re hugging and then..BOOM. Gunshot. Commercial.

THAT WAS THE WORST/BEST CLIFFHANGER EVER AND I DON’T APPRECIATE IT. I’m practically in tears over here.

Cut to Hanna seeing Caleb being loaded into the ambulance and she’s crying hysterically. There’s sad music and I want to cry with her. But then I see another body bag and realize Caleb is still alive. Nate is dead. But then..who shot Caleb? Did Nate drag his bloody body to grab the gun and shoot Caleb and not Emily?

In the hospital, the girls get a call from A saying “Thanks Emily, I owe you one.” Then Garrett walks in with Spencer’s mom with a creepy smile. Ugh! He’s out of jail. Now time for the big reveal.

Mona is being escorted back to the mental hospital by someone in a black hoodie. She complains that their original plan of framing Paige had to be postponed. She bids farewell to hoodie number 2 and they turn around to reveal..

I literally screamed out loud. WHAT?? He looks like a murderous rhino about to eat his dinner. Was he in on this all along? We know he hated Alison but maybe he’s under cover?