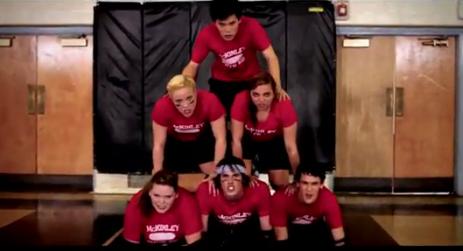 Who went home on The Glee Project? Can the cast prove how tenacious they are when their video shoot requires the most of them that’s ever been asked so far? Find out the results of this week’s episode, Tenacity, here.

The homework assignment for the week is Survivor by Destiny’s Child.

Amber Riley is the guest mentor for the week. She shows up with two stress fractures in her feet.

The music video for the week is Eye of the Tiger. The fine print? They have to complete the video in one shot. If anyone messes up, everyone has to start over. And it’s an obstacle course.

They take over 30 takes. Shanna throws up, and Abraham smashes himself into a door and sprains his ankle. Aylin accuses him of exaggerating his injury.

Michael. He sings Brick. Nicki says he’s not as good as Blake. Rude.

Lily. She sings I’m The Greatest Star. Lily was amazing.

Abraham. He sings Man In The Mirror. His limp looks super fake. Abraham walks back out after everyone is done and tells them he refuses to go home. I can’t believe he’s doing this.

The cast of The Glee Project take on their biggest challenge ever by showing their Tenacity. This week’s music video challenge was filmed in one take. The pressure was on to make sure no one messed up during the filming of Eye of the Tiger.

I think Michael and Blake sound great on this but Abraham’s lip syncing kept confusing me. I can’t tell who won the homework assignment based from this. Alli or Abraham are my guesses.

Watch the video here:
I would never want to be on the bottom of a pyramid. I’d feel like a human seat cushion.