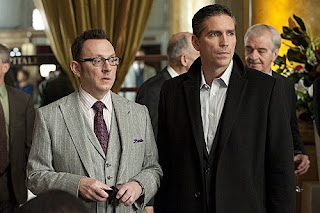 Only a couple more hours until tonight’s new episode of Person of Interest. If you can’t wait, here’s a new sneak peek into the episode. In this great clip, I can’t decide whether Reese is kicking ass or getting a piggy back ride. Person of Interest airs tonight at 9pm on CBS.

Person of Interest returns Thursday with a brand new episode. The episode features the return of Paige Turco as Zoe.

Reese and Finch’s latest POI is a down-on-his-luck man who may have reached his breaking point. As the case evolves, the duo calls upon a former POI for help, the resourceful and well-connected Zoe.

Watch the promo for the episode here: