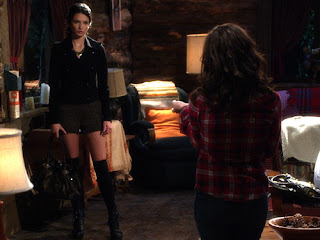 While Ethan is being held in jail, his friends on the outside are trying to prove his innocence. The first thing on the agenda is to find him a decent lawyer. Dan calls in a favor from an old friend of his and Alec’s and asks her to represent Ethan. She’s ready to take on the case but immediately gets cold feet when Thayer and Emma begrudgingly tell her that Alec was seen at the scene of the crime. Why is everyone so afraid of him?

Thayer brings Sutton home to stay in the cabin while Emma continues to be her. Emma decides to go to Rebecca with her fears about Alec and Ethan. Uhoh. Was that a stupid move? After this, Rebecca begins to get anonymous texts from someone when she’s around Alec. They tell her not to trust him and eventually send her a picture of him with the murder weapon in his hand. Did she know all along? Is she sending these to herself to get a rise out of Alec?

Laurel and her band get an amazing opportunity to play at Coachella. She’s stoked for the opportunity but knows her parents would never say yes. Sure enough, they tell her she’s too young. The next day however, she tells her bandmate she’s all set and ready to go. Hmm. I am loving the flirtation between her and her bandmate. Their music is awesome!

Ethan’s lawyer tells Emma she’ll text her with a time she can secretly see Ethan before his arraignment. Sutton sees the text before Emma and deletes it so she can’t go. Sutton goes pretending to be Emma. She is so horrible. And she’s only getting worse. Ethan uses the opportunity to tell “Emma” that he and Sutton almost hooked up and that he regrets it because Sutton means nothing to him.

Sutton as Emma is obviously seething inside and decides to get a little revenge. She tells Ethan that she slept with Thayer. Ethan, thinking Sutton is still Emma, is pissed. When the arraignment day comes and Ethan’s case is dismissed, Emma is waiting there to celebrate with him. When he refuses to even look at her, she can’t understand why. Sutton tells her it’s because Ethan slept with her when they were at the ranch.