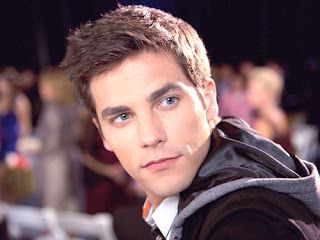 The girls are busy planning an annual fashion show in town when they get an unexpected invitation to lunch from Alison’s mom. She’s back in town to run the fashion show as a tribute to Alison’s memory. She wants the girls to walk the runway in four of Alison’s dresses. Um. Creepy much?

This fashion show is plagued with unwanted tension all around. Spencer is trying not to strangle Mona who has taken over calling the shots and is instead settling into the waiting arms of Toby. All this talk about how the girls all have relationships is making me think things won’t be too pleasant for these couples much longer. Spencer is concerned when she catches her father screaming at Alison’s mom about Jason. What is he hiding? Did they have an affair?

Hanna is struggling with letting Caleb back into her life, Aria is (rightly so) keeping an eye on Jason’s ass, and Emily is confused at Samara not wanting to be exclusive. This paves the way for a Maya return in my opinion. Emily’s mom is missing her dad a ton so Emily pitches the idea of staying alone until Summer. Really Em? With a psycho killer stalking all of you? Yep. Sounds safe. After talking it over, Hanna’s mom offers to allow Emily to stay with them for the remainder of the school year. Two targets in one house? A has it made right now.

Aria and Jason are getting closer. Does Fitzy have anything to worry about? I’d say so, I mean, this guy is an underwear model and Fitz teaches English. Jason worries about what he told Aria at the funeral but she assures him that she won’t tell anyone. Does he have anything else to hide? What’s The Jason Thing? Aria goes to see him to go over pictures to use for the video tribute that will be played at the fashion show. She’s using the time together to question him and hopefully awaken some repressed memories about that day Ali disappeared. He catches on and isn’t a happy camper.

The fashion show arrives and the girls are on the catwalk in some questionable outfits. Perhaps only questionable to me because I’ve never understood fashion. But hey, check out the Tresemme product placement. Work that dry shampoo Aria. Spencer gives Noel the picture tribute and I can already see this won’t end well. Noel and/or A is so going to mess with that. And wouldn’t you know it, things don’t go smoothly. Once the tribute begins, Alison’s pictures are morphed to look demonic while words and a song loop to say “The Bitch is dead.” Yikes. A really isn’t subtle huh?

I was kind of hoping A would show the Ian video, if only to see Ryan Merriman on my screen. I’m so confused about Noel. Is he trying to make himself look creepy on purpose? I can’t remember him ever having a grudge against the girls unless you count knowing about Fitz and Aria. He gives Aria back the disc, creeps and says he wouldn’t want to get them in trouble. Aria loses it and tells him he should keep his handiwork. Jason comes along to bring some sexual tension in the room (Aria/Jason Jason/Noel I’m not picky) and snaps the disc in half and takes Aria home. How long before they’re dating? The scene fades out to show A buying some boots online. Um. Okay? I’m not sure what just went over my head but I haven’t a clue as to what that’s supposed to mean. Why does A need those boots? Who else has them?

Was anyone else noticing the creepy, overly dramatic Lost-esque music that was being played all episode? I kept waiting for the logo to flash. Also, Melissa and Ezra were both out of town in this episode. Just sayin.