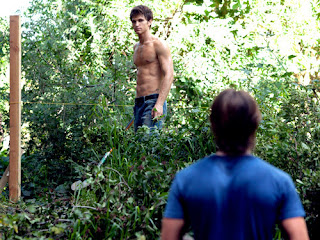 Spencer’s paranoia is really showing in this episode. Not that she doesn’t have a reason to be paranoid because she absolutely does. In fact, I question her parents for staying out of town after their house was broken into. The girls have resorted to hiding in bathroom stalls to talk to each other and mull over the possibilities of what Melissa could be hiding. Spencer is so afraid for everyone around her that 0she tries to beg Melissa to sleep in her room with her because she doesn’t want to be alone. Melissa is like, the worst sister ever and barely bats an eyelash at Spencer’s plea.

Spencer’s worries start to grow once she learns that Toby has found himself a new construction job. With Jason. Building his fence. Spencer is so convinced that Ian is inside that she steals Melissa’s engagement ring and pawns it to give Toby the money so he can quit his job. Dang Spencer that was a gutsy move. Where are you going to get two grand to buy the ring back? She doesn’t have to worry because A, of course, beat her to it. However, I appreciate the random shirtless Toby moments it gave us. He doesn’t need to ever wear a shirt. By the way, was his tattoo on a different side this week? New-Jason is kind of an Ahole. And there’s definitely someone else in his house. Who is it? And why is there blood in Jason’s garbage?

A has been pretty sneaky this week. How does no one notice a creepy person with black leather gloves breaking into people’s houses? Emily frets over her lame scholarship letter and writes herself a better one. She hesitates to send the fake one to her mom and ultimately chickens out, tears it up and throws it into the trash in her room. The next day, her mom receives it in the mail. How did A get in her room again? Lock your doors! Speaking of doors being locked, Spencer has a flashback to Alison crashing their sleepover when Jason has a wild party. Alison cries over the sink and what I’m getting from this scene is that someone molested her. Maybe I’ve seen too much Law and Order. Why else would she be crying?

Aria is taking a class at Hollis to be around Ezra. They’re a …semi open couple. Open to the college world but not her parents. How long will that last? Maybe not that long now that Ezra’s ex has spied them kissing. Much to Aria’s disgust, Jenna is taking the same class she is. Aria pretends her name is Anita while she’s around Jenna but doesn’t think to disguise her voice. How stupid is Aria? After Jenna has a mild breakdown over not being able to see her creation, she realizes it’s Aria who has been listening to her and she is not a happy camper. Does this mean Jenna really is blind? She did mention that she could see shadows. Maybe her vision is improving?

Spencer and co. decide enough is enough. When they notice Melissa sneaking out to see someone once again, they follow her. Melissa stops on a dark street to talk to some guy in a car. Is it Ian? Nope. It’s Wren! The British hunk from season 1 is back. But why? My guess is he’s the baby daddy.