I love Jurassic Park. So much. I spent my day yesterday at the first screening of Jurassic Park 3D that I could find in an IMAX theater. I’ve only seen one other IMAX movie in my life and it wasn’t that great. In fact, my overall opinion of all these 3D movies are that they’re unnecessary and a waste of money for a lackluster 3D experience. That being said, Jurassic Park is my favorite movie so I knew I had to go big and give it a chance.

Hold on to your butts.

The 3D version of the blockbuster film BLEW ME AWAY. It was incredible. It was everything I imagined it could be and more. It was 100% worth the money this time around and seeing it in IMAX only made it that much more amazing. If you’ve got an IMAX theater near you, I highly recommend it. The conversion to 3D is so much better than any 3D movie I’ve ever seen before. I noticed and enjoyed things about the movie I never have before and I’ve seen it about 100 times. I didn’t think a movie that was already perfect could get any better but they proved me wrong.

I honestly didn’t know what to expect. I knew the movie was 20 years old and wasn’t sure if it would hold up on the big screen. It definitely did. It actually looked better than a lot of the CGI movies nowadays. The puppets are so real and beautiful to me and the eye popping 3D only made it that much more intense when a raptor would jump out from a bush somewhere.

That opening scene when they have their first encounter with a dinosaur and the music begins to play? Beautiful. I actually shed a tear. I just wanted to get in a group hug with Steven Spielberg, John Williams, the entire cast, and a dinosaur because it was so good.

It was overwhelming as a fan to see this classic in theaters again. I’ve been waiting and hoping for years it would get a re-release, not to mention a fourth installment. I looked around my theater and saw parents bringing their kids to experience the movie for the first time, I heard people gasp and clap in all the right places, and more than a few comments about Jeff Goldblum and his constantly exposed chest. Can you blame them? Jeff Goldblum and Sam Neill were babes.

It made me so happy. You have no idea.

Bottom line: Dinosaurs never go out of style. This 3D version of the movie confirmed to me that the film still holds up and is just as fantastic as it was the day it came out. I highly recommend getting yourself a ticket and checking it out in theaters again before it’s gone.

If you need a little encouragement, EW has a clever drinking game for your enjoyment.

Sam Neill and Laura Dern on the Today show – Video 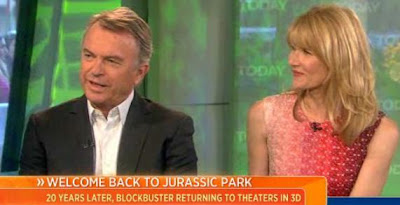 Welcome back to Jurassic Park! Sam Neill and Laura Dern appeared on the Today show this morning to celebrate and promote their iconic movie together: Jurassic Park. The film is being re-released in 3D to celebrate the 20th anniversary of the movie. Fans can see the awe-inspiring and jaw dropping 3D version of the film in theaters starting this Friday, April 5th.

I am SO excited for this. I plan to see it at least 3 times in both IMAX and regular 3D. I only wish Matt Lauer had asked the duo if there is any chance they might appear in the upcoming fourth Jurassic Park movie.

Check out the video of their appearance on Today here:

Visit NBCNews.com for breaking news, world news, and news about the economy 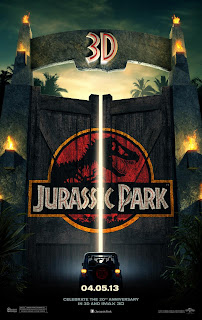