The Casual Vacancy by J.K. Rowling To Become a TV Show Great news for fans of J.K. Rowling and her new book The Casual Vacancy. It was announced today that it will be adapted into a series! According to The Hollywood Reporter:

The broadcaster’s flagship channel BBC One and BBC Drama have commissioned an exclusive adaptation of the book in a deal with The Blair Partnership, which represents the British author.

Rowling will collaborate closely on the project, with the number and length of the episodes “to be decided once the creative adaptation process has formally begun,” according to the BBC.

I’m happy that Jo is happy and working closely with the project. I’m reading the book now and I’m curious to see how it will adapt. Did you read the book? If so, what did you think? 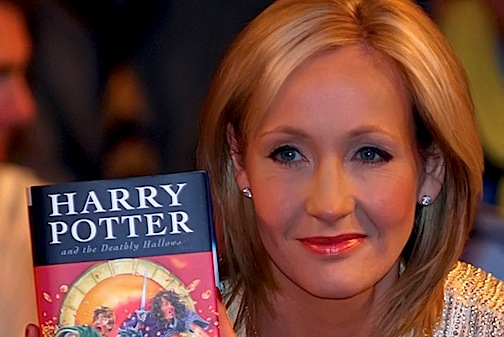 Do you hear that sound? That’s the sound of Harry Potter fans around the world freaking out. JK Rowling admitted in an interview with the BBC that she wishes she could have had more time with the Potter books and has been considering a director’s cut of stories or even, wait for it, a prequel.

The 47-year-old author added that, while “where Harry’s story is concerned, I’m done,” she was considering a new story set in the same Potter universe.

“But … if I did have a great idea for something else, I probably would do it. I am very averse to the prequel-sequel idea. A sidestep could maybe … well, we’ll see.”

I don’t think there are words to describe exactly how much I want this to happen. There are so many stories left to tell about a ton of characters. This woman and her genius mind created a whole world for fans to enjoy. Don’t forget to pick up her new book coming out this week: The Casual Vacancy.

Oh my Gosh! Is this a joke? It looks like it may finally be for real! JK Rowling has updated her site and announced plans to release the long awaited Harry Potter Encyclopaedia. She has confirmed that she has begun work on the book and fans everywhere began to implode with excitement. When she is finished, she will donate all the royalties to charity. Are you excited??

What about the Harry Potter encyclopaedia?
“For a long time I have been promising an encyclopaedia of Harry’s world, and I have started work on this now – some of it forms the new content in Pottermore. It is likely to be a time-consuming job, but when finished I shall donate all royalties to charity.”

I am so excited. I know it’s a long time away but ahh! I need to hop on up a medical step stool to see a doctor for a strong case of FREAKING OUT WITH EXCITEMENT.

JK Rowling has announced her first follow up to her Harry Potter series. The Casual Vacancy is a book geared towards adults (but really, adults love Harry Potter too). Not much is known about the series but now we have a brief synopsis, a release date, and a brand new website to get ready for it. Will you be reading?

The Casual Vacancy will be released on Thursday, September 27th. Here is a brief synopsis from The Little, Brown Group’s official website:
“When Barry Fairweather dies unexpectedly in his early forties, the little town of Pagford is left in shock.
Pagford is, seemingly, an English idyll, with a cobbled market square and an ancient abbey, but what lies behind the pretty facade is a town at war.
Rich at war with poor, teenagers at war with their parents, wives at war with their husbands, teachers at war with their pupils…Pagford is not what it first seems.
And the empty seat left by Barry on the parish council soon becomes the catalyst for the biggest war the town has yet seen. Who will triumph in an election fraught with passion, duplicity and unexpected revelations?”

Does this mean we can’t play around on her old site anymore? That used to be so much fun :(. It’s a shame it’s being released in September. I’m still trying to come up with mothers day gift ideas.

What do you think of The Casual Vacancy? Does it sound interesting? It kind of reminds me of that movie Hot Fuzz.