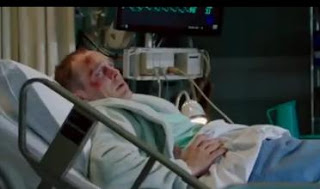 What happens when an outsider (Ethan Embry) comes to Storybrooke? What happens when his life is put in the hands of a town that is divided on whether or not they want him to live? How dangerous will Rumple be now that his true love doesn’t remember him at all?

Check out our recap of this week’s new episode of Once Upon A Time: In The Name of the Brother.

It’s been a wild night for Storybrooke. A mysterious guy from Pennsylvania came crashing into town, ran over Hook, who by the way shot Belle so she would fall over the town line and forget herself, and he may or may not have seen Rumples doing magic. He needs Dr. Whale to perform surgery or he won’t live. The town is divided on whether or not they should just let Greg die. They worry they’ll meet the same end as ET. Could a guy with a Star Trek ringtone be so bad?

Rumples won’t heal him and wants nothing to do with anyone. He’s in a bad mood. The love of his life screams when she sees him and doesn’t want him anywhere near her. I’m getting such LOST flashbacks right now. And did she really have to murder Chip? Ugh.

The man responsible is handcuffed, or hook-cuffed, to a bed in the hospital with some broken ribs. His mind went to the same dirty place that mine did.

A Monster or Two

In a special black and white part of the episode, the flashback to Fairy Tale Land (or is it? Henry points out that Frankenstein isn’t in his book of Fairy Tales) shows Dr. Frankenstein succeeding in creating his “monster” when he’s forced with the hard decision of bringing his brother back to life. His brother is not totally there, somewhat like Daniel, and wants to be put out of his misery. It certainly explains how conflicted the doctor is in Storybrooke.

Cora wants to make a truce with Rumple. She’ll give him the tool to find his son if he’ll help her find Regina. Cora poses as Henry to get to Regina and she puts on the I’m Sorry and I Love You act. Is Regina going to fall into her trap?

Do You See What I See

Before questioning Greg after his surgery to find out what he saw, he keeps getting a phone call from “Her.” Rude much? At least use a name. Is he really just an outsider? Does he have a bad motive? He tells Emma he was texting while driving and didn’t see anything. But in the last scene we see him call this mystery woman and say “You won’t believe what I saw.”

Uhoh. What’s he going to do? Do we know his mystery woman? And what will happen now that Rumple has made Emma cash in on her favor? It’s kind of a lame favor. I mean, going on a roadtrip to find his son isn’t the worst thing. I wonder what his roadtrip playlist looks like.

Once Upon A Time returns in three weeks with a new episode Tiny. Check out the preview here

Once Upon A Time Preview: 2×12 In The Name of the Brother – Promo

Is anyone else still freaking out after last night’s new episode of Once Upon A Time?? What an episode. And that ending! It had everything I liked and all the things I didn’t like were very minimal. There was lots of Rumplestiltskin, lots of Captain Hook, happy scenes with Archie, and it was full of action, suspense, and a hint of a cliffhanger. Next week’s episode will see the addition of new cast member Ethan Embry. His identity is still under wraps but the town doesn’t look too welcoming to an outsider. I love Ethan so I can’t wait to see what he’ll bring to the show.

Check out the preview of next week’s episode In The Name of the Brother here!

The episode will be half black and white, half color, and full of awesome.