Charice Will Not Be Returning To Glee 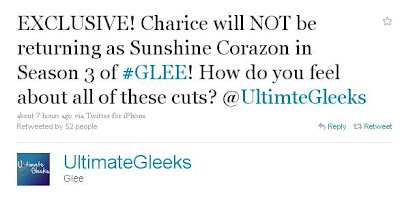 The list of cast members not being asked to return to Glee next season is growing and Charice is the latest to get the boot. She joins Chord Overstreet (allegedly) who it was also reported will not be returning.

I would say I’m more sad to see Sam go than Sunshine. She was so awful. Sure, the girl could sing but did she really belong on the show?